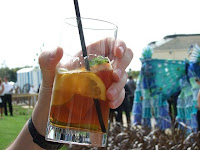 Cheers! Mines a Pimms & lemonade on a scorching hot day at the grand opening of Butlins rather swanky new Ocean Hotel at Bognor Regis. I have to admit the last time I was at Butlins the year was 1984, the weather damp, my trousers were short (as indeed they are today) and my age 9 years old. There was a distinctive feeling of Hi Di Hi about it all back then, helped by the chalets and the canteen but as I sit on the fourth floor balcony watching the dancers on the palisade down below doing the conga to Ricky Martin, I feel things have moved on somewhat.

Butlins have apparently spent £20m on this hotel and if it doesn’t sound like a backhanded complement, there’s something distinctively un-Butlins like about it. The lifts play you disco, the rooms are equipped with flat screen tellies, aircon hums nicely on a hot day and it seems just darn funky- full of lime greens, oranges and other bright colours. It’s a million miles away from what you might remember as a nipper yourself or have seen on Giles and Sue’s Supereaters in the ‘50’s the other week on BBC2. 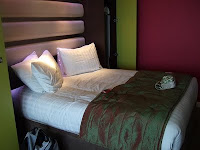 The dancers have been replaced by some acrobats now, much to the joy of Mladdo who is having the official time of his life, even if once the costumed animals get too close, he decides shyness is the best option.

We’re great in this country of taking American concepts and robbing them of the very thing that makes them a good idea to start with (for example we love queuing for ages at fast food outlets and our amusement parks are nothing like as amusing as the yanks have) but at least here I think we’ve got a British company that’s on to a winner.

My only current reservation is how well it will integrate into the existing Butlins Village but since we’ve got a couple of days here to find that out, I’ll be able to report on that later.

I have to say a big thank you to Butlins for the invite and to Lynne Parker for organising the two nights free accommodation and generally looking after us all so well. I’ve been put under no pressure whatsoever to write a positive review but basking in the glow of a slap up meal with 5 puddings and free flowing Pimms, I’m in a garrulous and generous mood.

And now M’laddo wants to go and look at the things. I must away. Adieu