I took the nippers out for a stroll on Sunday morning. The weather was nice (not too hot yet) and the lady wife wanted to do some ironing. I’d been up since 3am with the wee lass (don’t ask) and was going a bit stir crazy and it was only 9.45am. 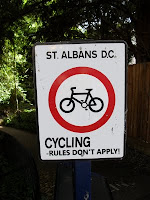 Walking off our estate, the first thing to note is my eyesight isn’t what it used to be. I always thought this sign said “no cycling” through the park but, judging by the number of bikes I’m always buzzed by on my daily walk to and from work, it says something entirely different.

The hill is a bit of a killer on the way back and on the way down it’s a fight to stop the pushchair running away but at least we have the Roman walls to keep us company. You’ll note the iron railings, after a brief flirtation with madness, common sense prevailed and they’re not being removed. You see, the council considered removing them in case vandals hurt themselves climbing over them to destroy the Roman wall. The same council that puts up no cycling signs and then doesn’t bother enforcing them. They might as well put up no trouser signs for all the good it does- at least it would save me from wearing the crotch out on my work pair.

*I’ve given up on obscure song title references as all it does is banjo the google indexing. Ho hum.