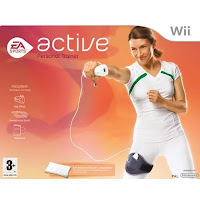 When wifey agreed to review EA Sports Active, little did she realise that she would get a copy of it at the time of her operation thus rendering her unsuitable for its attentions. At least in my boy naivety I thought that was the case but since she’s passed it over to me I’ve begun to reassess and am now wondering if she’s smarter than I give her credit for. Yes I am carrying a few extra stone I could do with shifting, even though with 5 miles of walking a day its beginning to shift.

EA Sports Active is a Nintendo Wii game that’s supposed to get you fit. Wii Fit (clues in the name there) was supposed to get you fit, sold millions and didn’t really get anyone fit. All it did was bang on about your balance and let you do the ski jump. This is a different kettle of fish really. It eschews the cute little Mii’s that most Wii games give you to represent you on screen and gets you really going at it.

I’ve only had a couple of sessions so far but I can tell you it’s much harder work than Wii Fit and when I build up the courage to hit the 30 day Challenge (which will have to be soon as its got to go back- boo hiss EA- in September) I imagine it will hurt a bit.

More to come when I stop being a wuss :)