Wifeys post on all things nostalgic reminded me of my youth and the days I spent hunched over the keyboard of my Sinclair ZX Spectrum. My career as a programmer lasted but a brief time as I ended the two hours of typing in a programme from the back pages of Sinclair User magazine with the “run” command, only to see it crash and reset itself. Hmmm, I thought, I could have spent those two hours playing something fun, blow this for a game of soldiers.

And so a life long addiction began. 27 years on from playing Space Invaders on the Speccy, I still dabble when time permits with my Xbox360 or the Wii (when M’laddo lets me have a go anyway).

But thanks to the world of emulators, I can go back and play all the stuff I used to as a nipper if I’m so inclined. And after reading that post I am so inclined.

Which brings me to Spectaculator, a rather nifty programme that lets you play all those 8-bit Speccy games in their glory.

There are plenty of games I played to death when I was a nipper- Thru the Wall, Space Invaders, Eliminator, Xevious, TerraCresta and so on but the one that still haunts my dreams is the Hobbit. 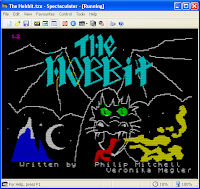 It came with a copy of the book and was so blinking difficult I hardly ever played it. I was too young to know that I should have grasped a piece of graph paper and through trial and error mapped everything out. Instead I invariably gor eaten by trolls or fell off a mountain cliff pass. This tended to be after about 3 locations in the game but since it was a Spectrum game, had taken 10 minutes to load, and (if it didn’t crash), a further minute or two to render each picture, it all took a while, giving the false sense of progress. And to rub it in, at random intervals Thorin the Dwarf would appear and sing about gold.

Well, let see if as an grown up I can progress a bit more :)