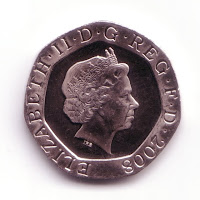 Those words were uttered by me on more than one occasion in the mid 1980’s (I would have been ten in 1985 you know). 20p got you a lot in 1985- it was enough to buy a copy of the Beano (14p) and have enough over for a sizeable bag of sweeties. And if your little brother had a similar 20p, the Dandy was also a distinct possibility, along with a pooled collection of sweets that was too big to argue over without feeling sick. I have to admit a secret love of Whizzer and Chips though, the idea of it being two competing comics in one, was both dangerous and exciting in a way that few printed things are for little boys.

It got me thinking though as I pocketed the change from a box of large matches in Wilkinsons earlier on today, does loose change actually serve any purpose other than to provide change for things that don’t come to a round pound? 25 years of inflation (well 24 and one year of deflation but lets not get pernickity eh?) has meant that 20p isn’t really worth much any more, unless of course you’ve got one of the Royal Mints cock up 20p’s without a date on it.
So, with a bit of research, this is what you can get for your 20p now days: 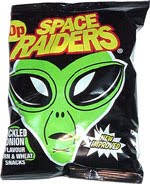 Space Raider crisps! That’s right! A blast from the past, coming in either small bags (10p) or big bags (20p) and all the proper traditional flavours like cheese and onion, pickled onion and salt and vinegar. The best thing is, its not an ironically retro crisp, its just plain old fashioned and proud of it. 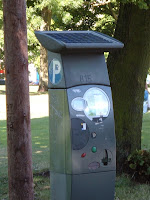 6 minutes parked on Trumpington Road in Cambridge (a good 15 minutes walk from the city centre but usefully close to the Fitzwilliam Museum. Not so useful really.
Back in the 1980’s my Dad’s Mark 1 Golf would have been parked pretty much anywhere a ten minute walk from the city centre for nothing. Not that he would have, he’d have shoved it in the Lion Yard car park and probably paid about 50p to park there himself.
Ignoring the inflation on car parking, the amount of free parking has dramatically decreased over the years. 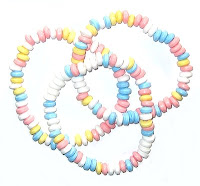 A candy necklace! Or, a third of what’s in the picture! They now cost an outrageous 15p. This is only outrageous if you fail to realise that the Beano now costs a whopping £1.25 a week. Makes me wish the Beezer was still in print!
And that is pretty much it. Panda Pops are too expensive, other pick and mix might just make it but have you seen the price of a BlackJack now days? So my advice is to either save them up and get them changed into 2p’s at the seaside for use in the 2p slidey machines, or develop a love for Space Raiders.
Me, I’ll have a bag of pickled onion please!