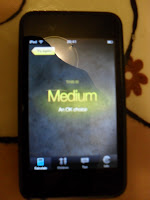 So, I was reading recently how breakfast was apparently incredibly bad for you (hurrah- I normally eat an apple on the walk to work as its quicker than scoffing a bowl of cereal). I thought this might be a useful tester for the infamous FSA Salt application on the good old iPod. I must start by saying that I used the producers portion size (30g) but I would expect anyone with an appetite greater than an anorexic lemur to have more than that unless they’re following the “serving suggestion” which involves a trip to the market to get some fresh oranges to freshly squeeze, along with some grapefruit and/or some strawberries and the lashings of perfect toast. Frankly I’d need to get up an hour earlier to manage that, so a larger bowl of cereal is my weekend breakfast of choice. 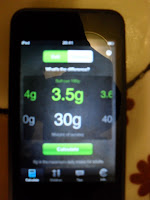 The first thing I noticed was the devious inclusion of sodium as well as salt on the ingredients list. The app usefully says that to convert sodium into salt you have to multiple it by 2.5. So 0.7g of sodium and 1.8g of salt per 100g soon add up. In fact it adds up t0 3.5g, which is more than half an adults recommended daily allowance, all in a paltry portion that the lemur is now thinking twice about.
All in all, I think I’ll stick to my fruity breakfast and eschew the boxed cereal approach. Although the lack of fibre will continue to cause those around me a problem :)