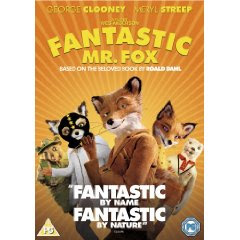 “Boggis and Bunce and Bean, one short, one fat one lean…” If these are words that resonate from your childhood, then you’ll probably be aware that Fantastic Mr Fox was recently turned into a film.

It has one of the most stellar vocal casts I’ve ever seen- George Clooney, Meryl Streep, Michael Gambon and a sly cameo from Jarvis Cocker as Petey, are the highlights but nobody really puts a foot wrong. Unlike a lot of the computer animated affairs, the characters aren’t homages to the voice talent either (Will Smith in any animation is definitely Will Smith).
In fact, the animation is in a league of its own. It doesn’t try to compete with Pixar because lets be frank, everyone that tries to do that fails miserably but the animation is so charming, you can’t help but love it.
But I’m getting a bit ahead of myself here, lets rewind a couple of weeks to a very generous invite to a private screening of Fantastic Mr Fox at 20th Century Fox’s offices in London prior to today’s DVD release. We also got a pre release copy of the DVD too. Which was nice. So obviously I’d seen the film about 5 times by yesterday morning.
M’laddo hadn’t been to the cinema before and I must admit I was a little apprehensive that he would have the ability to concentrate and keep still for the duration of a film at the cinema. It’s a bit different at home, he can wander around, grab a cheese sandwich, push his little sister over and so on and so forth. After all, he isn’t quite 3 yet.
I shouldn’t have worried though because as soon as the 20th Century Fox logo and anthem appeared (something my generation can’t really separate from Star Wars), an absolutely smashing grin appeared on his chops that didn’t disappear for approximately 83 minutes. He really was transfixed.
The film itself, in case you don’t know the plot, follows the titular Mr Fox as he plans one last caper, a raid on the farms of his 3 nemesis’s Farmers Boggis, Bunce and Bean. The raids go spectacularly well and incense the farmers. The farmers have their revenge though and try to dig him out of his home. Things escalate and soon it becomes a matter of life of death…
There are so many neat touches, the banter between Mr Fox’s son Ash and his cousin Kristophersson are brilliant, really capturing the tension between youngsters. The use of the word “cuss” instead of swearing is inspired and has entered my daily lexicon to boot.
As well as a great vocal cast, the film has a truly cracking soundtrack. The characters wander around with little music players clipped to their belts, a nice touch, to provide us all with some musical accompaniment. We get Beach Boys, Rolling Stones and a new composition from Jarvis Cocker.
All in all its remarkably loyal to the book whilst being its own film and having its own style. I simply love the animation and hope they do another film using the same style. For M’laddo its joined “New BuzzLightyear” and “Flappy Bat” as one of his most favouritist films ever.
High praise indeed!