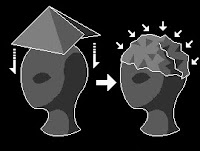 I haven’t joined the loony tinfoil hat brigade just yet but I am beginning to suspect our two little ones have some kind of psychic bond that functions in their bedrooms whilst they are asleep.

Fifi and M’laddo are in adjacent rooms, his bed against the same partition wall that her cot is pressed against on the other side. I am utterly convinced they communication via brainwaves in their sleep.

As any regular reader will know, the wee lass isn’t the worlds greatest sleeper but there are occasions where she tricks us with a good night or two’s sleep. Last night was one of these, she slept through until gone 5am. Of course this was mostly due to the strain of the unconscious telepathy she was doing. At just gone 4am, the boy responded to the telepathy coming his way by waking up and calling “Daaaaaaaaaaaaaaaaaad”. I’m pretty much the only person who he lets settle him at night, so I dragged myself up and into his room.

And, apart from lying there with him for ten minutes until he went to sleep, was it. There was no particular reason for him to get me up, other than the fact his sister hadn’t woken either of us up. Suspicious? I think so…