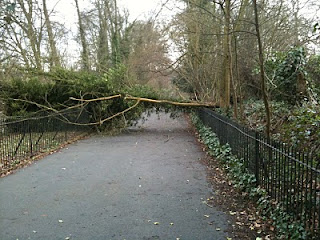 I’m always bragging to people that I love walking to work. I don’t have any of the stress or aggravation that most commuters have, either getting cut up by white man morons in their cars or being rammed on a train with thousands of people who don’t know how to cover their mouth when they cough.

There are downsides though. Most of them can be solved by the application of waterproofs, both of the jacket and trouser variety. This is a shame as I forgot both jacket and trousers yesterday so got caught in the thunderstorm that I’d plotted the course of across the south east via my twitter friends. The winds picked up too, making sure that every available part of me got a jolly good drenching. In fact my trousers were still wet to damp in places (much like the shipping forecast) when I put them on this morning and my shoes were far too wet to wear.

And as a motorist you don’t often have to put up with trees blocking your route do you? I have been baulked by trees/snow/fences as a motorist but lets face it, its not that regular an occurrence is it?