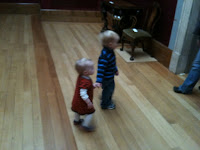 During a break from some rather epic gardening/decking/raised bed building, we popped up to Cambridge for the day on Saturday. Being a loving hubby, I offered to take (wrangle) the kids round the Fitzwilliam Museum after lunch so wifey could do a bit of shopping in peace. I’m good like that.
It’s been a while since I’ve taken both of them out on my own, the last time was a trip to the rather fab Imperial War Museum Duxford but this was the first time since the wee lass was adamant about walking rather than going in the buggy.
Not that I had to worry as the two of them are now the best of friends. M’laddo wanted to hold the wee lasses hand as she strolled along and she was happy for the security of it. It was indeed one of the cutest things I have seen in a long time. There were two problems that kept me from fully enjoying the situation: i) the speed of the two of them as the dodged in and out of the human traffic and ii) the gallery doors were individually slightly narrower than the buggy, necessitating me opening both more often than not.
On the second point, I must say I have never come across staff so universally lovely and helpful as the staff at the Fitzwilliam. They usually shout at me for owning a mobile phone, which should be switched off apparently as they have the worlds shonkiest alarm system which is ruined utterly by mobile phones, but on this instance every single member of staff that saw me heading towards a door offered to help.
If you’re my wife, you can stop reading here and naturally assume that everything went okay and so on.
They even helped when disaster struck! We’d reached the exit and I was re-garmenting us all, coat on Fifi, coat on me, jumper on M’laddo, coat on M’laddo. Hang on a tick, where’s his coat???
Front of house walkie talkied around to see if it had been handed in but it hadn’t. Unfortunately we’d been in every single gallery at least once, including the fan room, which had steps in and out of it and was only marginally larger than our kitchen. The panic began to set in, I knew wifey would be unreasonable and blame me rather than M’laddo (should he have been keeping a better eye on his coat? He is almost 3) so I knew we had to find it or I’d be in trouble.
We did two laps of the entire museum at speed, asking all the concerned staff whether they’d been handed a coat whilst they held the doors open. No one had seen it. And it wasn’t there. I was fairly sure I’d covered every square inch of the museum, so unless they’d accessioned it into a collection someone must have picked it up.
We returned to reception with M’laddo of the verbal opinion he wanted his coat and of the silent opinion that Mummy wouldn’t have lost it when an American gent walked past it and handed it in. I bounded up and gave him a rather too vigorous handshake because I was fairly sure he must have been walking round with it for at least an hour but at the end of the day everything worked out all right. Which was a relief.