We’ve been trying to no avail to get either a generic or specific to the makers patio door lock to enable us to shut the door part open for ages now. M’laddo likes to slam it shut you see, and whilst he is now savvy enough to ensure that his fingers aren’t trapped, we felt it was only a matter of time before he caught the wee lass’s fingers (or more of her) in it. Ouch!

Well we finally gave up and I popped down to Homebase to have a look at their clamps. I ended up with these little babies: 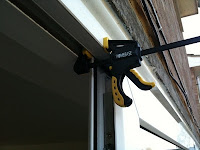 Two ratchet clamps for £8.49. I was worried the sprung loaded ones would be; i) too heavily sprung for wifey to open and ii) might actually damage the door frame. But these are ideal. Now we can have the door open and wont run the risk of accidental sibling manslaughter. Which is nice.
The only down side so far? M’laddo was devastated when I took his “poo poo gun” off of him. Apparently when we play space battles and I make a “pew-pew” laser noise, he interprets that as me firing poo poo at his space ship. Interesting extra dimension to the stickle brick space ship wars I suppose!