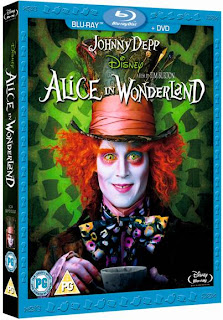 Alice in Wonderland is one of my very favourite childrens books. I’ve lost count of how many times I read it as a child- I certainly know it better than almost any other book. I’m also a huge fan of Tim Burton and Johnny Depp, and Tim Burton and Johnny Depp working together too. Sleepy Hollow is in my top three films of all time ever, and whilst Icabod Crane isn’t exactly honest to the source material, it is a cracking yarn.

So Alice in Wonderland, my favourite childrens book, coupled with my favourite director and leading actor should have given me the goosebumps and possibly lead to some sort of swooning.

The film has already courted controversy, one cinema chain threatened to boycott it entirely because the studio wanted to get it out on to blu ray and DVD rather sooner than is the norm and, horror of horrors, its not a straight adaptation of the book, rather a pseudo sequel (ignoring Through the Looking Glass) set thirteen years later.
Fortunately this doesn’t stop Alice in Wonderland for being a rather excellent film. My initial dismay at the lack of reverence the source material was given was soon dispelled by the fantastical world that Burton has created. I believe it’s his most CGI’d film to date but it doesn’t really intrude that much. In fact the visual effects are often playing second fiddle to the costumes which are fabulous. The wifey tells me that ASOS even did a whole range of clothing inspired by the costumes! Special mention must be given to the Mad Hatter and his apparel- and to his eyes which change colour to reflect his mood- he looks magnificently bonkers as Alice would say.

In fact you can see how bonkers the Hatter is here.

The film follows Alices return to Wonderland as a faux adult at 20 years old. Wonderland is a decaying mess under the tyranny of the Red Queen who is both wonderfully and disturbingly played by Helena Bonham Carter. Matt Lucas is great as Tweedle Dum and Tweedle Dee, albeit coming across as a little more simple than I thought they should have.

The world is pretty vivid, both in terms of absolutely gorgeous colours and also larger than life characters- a typical Tim Burton world in that sense then.

I think the only thing that stops it being the film I really wanted it to be is a lack of focus. It’s unsure where it wants to be a full blown dark adult film or a slightly creepy kids film and on occasion Depp, Hathaway and Bonham Carter cross the line into giving the younger ones nightmares. Which would be fine if it wasn’t for the Mad Hatters slightly odd dance at the end which seems a bit tacked on.

Nevertheless, its a cracking film and well worth owning on blu ray if you ask me.