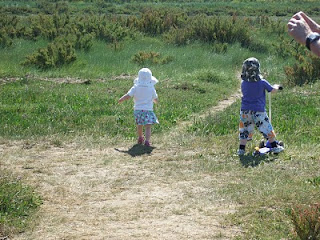 I’m not a “my pint is half empty” person. Come to that I’m not even a “my pint is half full” person. I’m really a “woohoo!!! A PINT!” sort of person. So when the eldest came out in horrific chickeny poxy spots two days into our holiday, it wasn’t the end of the world.

M’laddo had a bad night with the pox and woke up with an awful lot of spots. During the course of today they’ve multiplied and some of them have popped and crusted over. There are some spots in places I wouldn’t wish spots on my worst enemy. Horrible stuff, so we decided to call it a day and head home.

We’re responsible parents (even our 3 year old covers his mouth when he coughs) and there were a lot of kids around in North Norfolk generally and Wells Next the Sea specifically, so we felt it better to come home to our creature comforts to sit the illness out.

As Wifey points out, the complete cost of it all is probably around £1,000 in holiday expense and lost childcare already paid for but to my mind thats already paid for so its an historic cost. Theres nothing we can do about it now, its in the past, let it be.

We’ve both been looking forward to this holiday for ages. We really needed it to be honest, we both work incredibly hard- Wifey mixes work with childcare without a break or any time to herself and I was doing 12 hour days in the lead up to our holiday to ensure I had everything done in the office. Gutted is a word that fits rather well.

But theres also perspective. We’re lucky to be in a position where we can afford (with sacrifices) to go on holiday. We’re lucky its just the pox as well. One chap I know had a poorly wife, less than a year later he was a widower with a young lad of his own to bring up without a mummy and they’d both had to watch the cancer eat her alive. Even the owner of the lovely restaurant we had our wedding reception at died recently at 37. Next to suffering like this, I want to say, “Woohoo!!! We had two fantastic days at the beach!”