The bowdlerisation of some of the things I hold dear from my own youth is something that constantly irritates me. Some of the time it is necessary, I certainly wouldn’t want to watch Noddy if it was full of gollywogs nowadays and I certainly wouldn’t want my kids to either. Most of the time however it is baffling and unnecessary when books and programmes are sanitised to the point they are dull and uninteresting.

Times change and society does too, Dennis the Menace is much more likely to get his pocket money stopped today than he is to get slippered by his dad for whatever naughtiness he has been up to. What baffles me though are the changes for the sake of change.

Take the case of Raggety from Rupert Bear. I have the original annual with his first appearance at home and he looked like this: 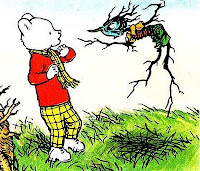 He was a nasty prickly character that made a terrible mess in Rupert’s home. Rupert’s world back then was allowed to have things that were unpleasant, even a bit scary in them. Contrast that with what Raggety looks like in the latest iteration of Rupert and you’ll see no discernable similarity:

He’s now a fluffy little tree elf who loves using his tree magic to help everyone. For goodness sake. Can our children not cope with a character who isn’t fluffy and lovely? What do they do when they come across a kid at pre-school who isn’t fluffy and lovely? At least in the original Rupert they could take Rupert’s example of how to behave when someone is nasty to use but now…

It does get worse though. There are decades between the two different versions of Raggety. Noddy is even doing the same thing with a gap of years. There are two naughty goblins in Noddy, just have a look how they have changed in a really short space of time: 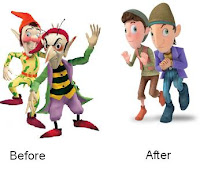 Why? Getting rid of the golliwogs made sense, they’re culturally unacceptable now (and rightly so) but this is incomprehensible. I’m clutching at straws but maybe someone somewhere has decided its a bad thing to frighten kids, even a little bit. Maybe they’re right but in my mind its not helping prepare the little ones for the real world and, dare I whisper it, kids actually like being scared a bit.

I run around threatening to blow raspberries on both our pre-schoolers tummies and they shriek in delight at the prospect of it. It’s a little scary as it tickles but they know they’re safe. And if you’re a responsible parent that watches TV or reads a book with your children, they’ll have that same sense of security when they see unsanitised material like the original Raggety or the old Sly and Gobbo- heck, I’m not even pushing for the original Noddy, as he could be a right piece of work at times.

In a time when film trailers warn us that it might contain scenes of “mild peril”, don’t you think we should let our kids experience just a little bit of it? Or does that make me a terrible dad?