When I was a nipper growing up, there was only one Great Dane on the telly thanks to Hanna Barbera. Ironically there was another Great Dane that predated him, and he was called Marmaduke. I remember reading the comic strip when I was really little and when I got a bit older, there was a cartoon called Heathcliff and Marmaduke.

And now, with the vocal talents of Owen Wilson, Marmaduke has come to the big screen. 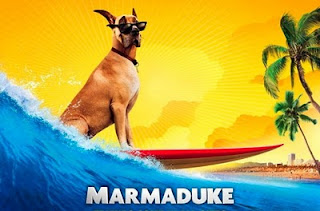 We were lucky enough to get a couple of tickets to Sundays preview screening at the Vue Cinema Leicester Square. There was face painting, goody bags and popcorn but most of all their was a huge dog.

In a summer thats been full of animal films (we’ve seen cats, dogs, foxes, the works), Marmaduke has plenty going for him. It balances the adult (for adult, read juvenile) humour that appeals to parents and the slapstick that appeals to kids with the usual moral backbone thats essential in kids films nowadays. Lets face it, any film that sees the esteemed actor William H Macy catapulted into the air twice in as many minutes obviously has something going for it.

The family that Marmaduke owns are pretty pencil thin in terms of characterisation but they are there to do a job and they do it fine. The real stars of the show are the dogs. Marmaduke is the best and Owen Wilson does the job brilliantly but Keifer Sutherland(!) and Fergie also do great jobs too.

The plot is an intertwining story of trying to fit in and being true to yourself that covers both the humans and the dogs. Marmaduke tries to reinvent himself from the hapless clumsy pup into a cool dude when his owners move to the O.C. In the process he makes some friends, betrays his friends, hangs out with the trendy set and realises that he’s been a naughty boy.

I enjoyed it but the real litmus test was the Boy, who as a three year old is a lot more discerning than me. I had a few pats on the hand during the film to show his appreciation but his eyes were welded on the screen for the entire duration. Once more I had a monologue of “But I want a doggie!” on the way out, and this filled me with fear as a Great Dane is rather epically huge. If he was as ace as Marmaduke though, I’d be half tempted!

Don’t take my word for it though, have a look at the trailer: