It’s been 9 years since I sat on a plane to Australia watching Cats & Dogs because there was nothing else on. Yesterday I was watching the sequel with the boy because we’d been invited to the UK Gala opening of it at Holland Park’s Open Air Theatre.

The experience was certainly one we’ll not forget in a while either, to make up for the lack of celebs attending, we all got to walk down the red carpet (getting stuck behind some dogs being interviewed for a minute or so) and enjoy all sorts of activities before the screening. There was face painting, balloon animals, dog petting and goody bags to enjoy before the familiar stampede for seats that’s part of the cinema experience.

The event was so buzzing that I didn’t manage to grab that many photos or video clips unfortunately- I had to ensure the wee lad didn’t wander off or get savaged by a chihuahua.

Judging by the photos, we were sitting fairly close to Violet Posybut since I’ve never met her, I was none the wiser! 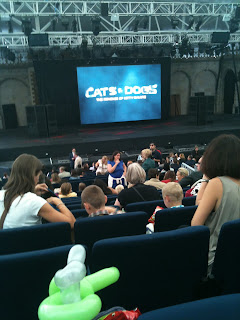 Before the film itself started we were blessed with a new Loony Tunes short. A Roadrunner cartoon in fact. It was decidedly odd seeing Wile E Coyote getting it in the neck in entirely new ways but very enjoyable. I understand Warner Bros are showing a series of these shorts before their films this summer, keep at watch out for them as they’re really in the spirit of the old cartoons.

As for the film itself, it certainly had the boy jumping up and down in excitement. At 3 and a bit he’s old enough for feature films but sometimes gets turned off by overly wordy kids films. Cats & Dogs 2 pips G-Force in the talking animal stakes on this front, there is more action and the dialogue is simpler. Whether the guinea pigs are aimed at a slightly older demographic (how old do you have to get before talking animals are silly?) I don’t know, but I thought Cats and Dogs 2 was better pitched for our lad.

The film couldn’t be more like a Bond film without actually having a character in it called Bond. Right from the title credits, which are a fabulous Bond parody with a cover version of Pink’s Get the Party Started in a very Shirley Bassey Bond style. In fact, looking at Wikipedia, it might actually be the one and only Dame herself doing it!

Of course, all this is lost on the little ones but it does help keep the attention of us older viewers while the cats and dogs go at it like, well, cats and dogs. It certainly works as a kids film, because despite being pretty scared of dogs up until the screening, all I had from the boy for the rest of the day was an endless litany of “me want doggy”. He had to make do with the memory and a Cats and Dogs frisbee, and until we get the film on blu ray that will have to suffice!

You can catch the trailer here: