One of the things I hate about larger toys, sit ons and bikes for the under 4’s is the sheer amount of tools you need to dig out. Much like how IKEA now needs both a flat head and a Philips head screwdriver, a hammer and an inordinate amount of patience to assemble a chest of drawers (MALM, I’m looking at you), we’ve got a trike from a very reputable manufacturer that required half an hour of assemblage on top of the 15 minutes it took me to find my screwdrivers and a replacement screw for the missing one. All this was on the boys birthday, while he sat in the sitting room enjoying all his other presents, I sat out in the hallway cursing under my breath. Bah and indeed humbug.

That was one of the first things that struck me about the John Crane First Bike; once I’d opened the box and removed everything from the tidy packaging, I was left with some nuts and bolts and a couple of alum keys, which was all I needed to assemble the thing. I wouldn’t be surprised if they’d kidnapped the head designer of IKEA and forced him to work in a shed for months on ends until he could come up with a durable design that could be put together with the application of bolts and two simple alum keys. It’s that well designed.

This was initial impression was borne out by the actual assembling of the John Crane. I finished it in under ten minutes, there was no blood on the carpet and we’d not had an argument about who had the screwdrivers last (“last” doesn’t include picking them up and moving/hiding them apparently). The design is well thought out, I particularly like how accessible the tyre valves are to a bicycle pump, something the makers of our pushchair could learn a thing or two about.

The saddle itself has an adjustable height setting and it’s here that we encountered the only problem we had with the bike. The box says for 3+ years, our little fella had turned three in April and isn’t short for his age. Even at the lowest setting, there was no way he could get the bike upright with even one foot on the ground. So after a little bit of cursing under my breath, we distracted him with some Playmobil and shoved it in the garage for a couple of months.

It came out a few times in the next couple of months, primarily to see if stumpy legs had got a little bit longer but also to show his friends. The extremely solid built quality was evidenced by the dads of one of our boys friends. As you can see he scooted around the garden on it happily. Nothing was even remotely loosened by this brazen abuse of bike. 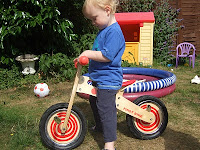 Finally though in the last month or so the boy is now big enough to scoot properly and he is doing so in spades. He’s enjoying it enough that he has put his scooter down and since a bike is much more suitable for the garden/off road, he’s had plenty of use out of it over the summer.

In a world thats full of plastic tat, it’s nice to have a well thought out quality wooden toy that is also well designed and well made.