My Lady Wife has blogged about the foraging we’ve done recently but I thought it was time I did another post on it. 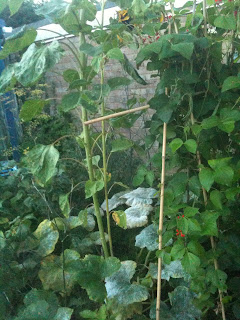 As well as rummaging around in fields and hedgerows, away from main roads and crop spraying, for fruit, we also have what I grandly refer as our vegetable patch. I sprained my wrist earlier in the year building some raised beds. I didn’t have an electric screwdriver, I built the whole thing by hand.

When we had finished it, the meagre planting we did looked a bit feeble. We moved a gooseberry bush, there was already some rhubarb and that was about it. Fast forward 5 months and the place is a jungle. We have raspberries, gooseberries, pumpkins, fennel, runner beans, corgettes, (an) apple, black currants and white currants. And a wild strawberry plant courtesy of Innocent.

It’s been fun to look after and satisfying to harvest but the kids have had a lot of fun and education out of it too. Partly because we have a lovely Budleigha, we’ve had lots of butterflies, so we’ve had caterpillar spotting as well as snail hunts, worm digs and we’ve even found a large frog lurking in the rhubarb. The boy has actually had a centipede crawling over his palm, which is incredible given how he used to get really worked up at even getting a little bit of mud on his hands.

The wood for the raised bed cost me about 50 quid, there was another 20 pounds on screws and woodstain. The plants weren’t expensive and since we have a water butt, the upkeep has been free. The whole raised bed only covers about 6 square metres, so you don’t even need a large garden to have a project like this. Come to that, you don’t even need to build a raised bed, I only did it as it backed on to the decking in front of our summer house.