Many many moons ago when I was a student we used to have an ace jukebox in one of the bars on campus. One of my friends commented once he never understood why someone put Fleetwood Mac’s The Chain on the jukebox, and always followed it with the BBC’s Formula 1 theme music. We roundly lambasted him for not realising they were two parts of the same song. We knew our music and we all loved cars, racing and most importantly racing cars.

And then the Sony Playstation came out, with Gran Turismo and hundreds of souped up cars that we could lust after. It wasn’t fair, none of us were ever going to get to razz it around the Nordschleife version of the Nürburgring, and even if we did, it wasn’t going to be in a Nissan Skyline GTR R34 (which thanks to Playstation became the poster car for a generation).

So time passed, cars were bought and sold, cars got steadily more practical and first a lovely wife and then two (mostly) lovely children appeared and the day dreams were put on the back burner. Razzing it around race tracks had progressed from Gran Turismo to Forza Motorsport 3 but they were still video game based. 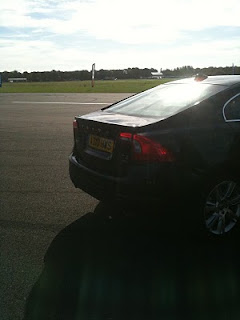 Cue an email from the lovely Sophie who invited me to a Volvo S60 Naughty Track Day. There were a number of locations to chose from but no choice really had to be made- the airfield where Top Gear is filmed was one of the choices so it was there that I went.

At this point I will interrupt myself and say Volvo have won. If anyone has £36,000 they’d like to give me I would buy a S60 T6 tomorrow, it’s that good.

What’s interesting is that the range topper is the only petrol engine in the range, the rest are diesel. Diesels come on a bit since I had a lift from someone with a Peugot 305 TD in about 1996. He managed to drive it almost exactly at the point where the turbo cut in and we pogo’d up the motorway for hours. I had a broken ankle at the time, it was a memorable trip. Even the much more reasonable D3 (£23,000) was a very nippy car, especially when you were almost sideways in it with an instructor.

The odd thing though is no matter how fast I was going or how I was throwing it about, the thing just felt “volafe” (a word of my own invention, combining Volvo and Safe to give that special sense of security you don’t often get outside of a Chieftain Tank). In fact the only time I felt out of control was when I wasn’t in control- Tommy Erdos (currently leading the P2 Le Mans series) was hurling the car around the Top Gear race circuit with gleeful nonchalance. I’ve only ever been faster round a twisting course once and that was in a taxi in Morrocco when the driver found out I had dysentery and he wanted to keep his upholstery clean.

I’ve driven a few new cars in the last couple of years, ranging from hot hatches to 4×4’s, and on to sensible family cars. None of them had the gadgets that the S60 did. The thing even has radar. Unfortunately it doesn’t display aircraft or missile locks on a HUD but it does scan for other cars and pedestrians with the aid of a computer and camera in an attempt to stop you running people over. Everyone with the faulty type of BMW 3 series they sell to people in St Albans should have to swap it for one of these, it would make crossing the road on green man a lot safer (the “fault” with the BMW’s is most likely the colour blindness of the drivers who can’t tell green from red I should add).

Even with two small kids I can’t see the need for one of the estates in Volvo’s range, the boot on this thing is huge. 339 litres according to what I’ve just looked up, which is only 80 litres less than a V50 Estate.

Of course I’d never consider driving a S60 D5 with wifey and the two kids in like this. But if I did they’d be safe. If a bit broke while I languished in prison for the next 6 months.

I’d have gone quicker but the chap wouldn’t let me put some heavy metal on the cd player. Ace of Spades adds at least 20mph to any car it’s played in :)

All in all it was a smashing day out. Volvo didn’t feel the need to attempt anything like a hard sell, they just let the car speak for itself. Even in my inept hands it felt good, high praise indeed.

Unfortunately I now want a Volvo. I’ll have to have a word with my boss and see about upping the company car allowance a smidge. If you want to read more about Volvo’s, have a shufty here.