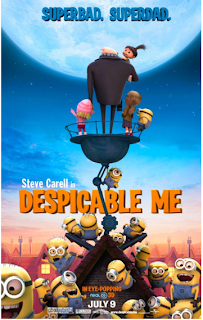 A couple of weeks ago we were all lucky enough to go to a preview screening of Despicable Me. It’s out at the cinema this Friday and I feel I must exhort you to go and see it. I think now days animated films are getting so good you can’t just view them as cartoons, they have to work as films in their own right.

The story follows Gru, an ageing super villain as he tries to keep up with the young upstart who happens to be the son of the Evil Banking boss.

From the point that Gru gives a small child a balloon purely for the purpose of upsetting said small child by popping it with a pin, you know you’re in for a treat. The script is very sharp, it’s got enough to keep adults happy as well as keeping the kids very amused.

I think I loved it and it was a bonus that both the nippers liked it too, which is the wrong way around for a kids film but doesn’t really matter does it?!

Despicable Me is out this Friday, 15 October.