When I was about 9 years old my brother and I had a small black and white portable television we shared. It was tuned via a dial and had a pull out on/off switch. We had it alternate evenings on the understanding it was turned off by 9pm at the latest. We probably spent more time tuning it than we did watching it.

One night I was watching the snooker on it in the dark. With practice you can watch snooker on a black and white telly you know. The balls are distinct separate shades of grey. At least you tell yourself they are and when you’re 9 things are easier that way.
The shriek I let out when two woodlouse scuttled out from under the bed and over the back of my hand was almost enough to turn the air blue, which was definitely more colour than the TV had. 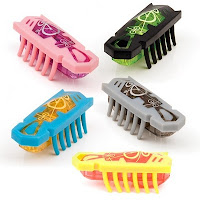 Ever since then I’ve been a bit reticent of insects and that was the reason I was a little hesitant when the Hexbugs turned up. They look like proper bugs, especially the black one. SHUDDER. A Hexbug is about the size of your thumb, powered by a button battery and once switched on quite unnerving but blinking clever. It moves around by vibrating and skitters about on its little rubber legs in a very convincing manner. The clever part is its pathfinding. If the Hexbug bumps into something, it backs off and tries another way. We built mazes for them out of Lego and Megabloks which was impressive enough but got downright freaky when we put two or three of them together.
Suddenly I was 9 again and the woodlice were out to get me! Hexbugs cost £8.95 each or you can buy a 5 pack for £27. They are definitely a unique toy and really encourage thought in kids- we had great fun “testing” how clever they were with mazes and tunnels. And I had fun putting the black one on peoples desks at work. Naughty me eh?