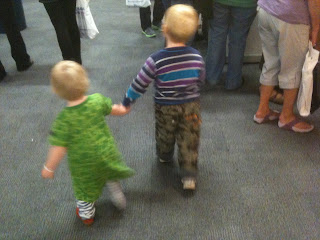 I’ve written in the past about our lovely (and she is lovely, despite anything I might write) daughter Fifi and her volume. There are two things toddler boy puts his fingers in his ears for, one is the hand dryers at public toilets and the other is when his sister hits full stride.

Last night the lil thing slept rather well. She went to be exhausted at 7pm, as per usual. When she does this she normal wakes up at 5ish but this morning she woke up at ten to seven. You would have thought she’d be all rested and ready to go, cheerful and happy. But no. There were many many tantrums in the hour before she went to the childminders. The first was a tantrum when she ran out of milk in her sippy cup. This continued when I went to refill it rather than her mummy. This subsided but was soon replaced with the getting dressed tantrum that revolved around not wanting to wear what she was given and escalated into a wanting daddy to get her dressed rather than mummy tantrum. This in turn became a wandering around behind people making a fuss general state of affairs which continued until she stuffed her chops with about half a kilo of Shreddies and I bundled her into her snow suit.

We had a lovely walk to the childminders, full of smiles, talk of cats, snow and the lack of cars and it was great. Then she realised that she had to stay at the childminders and kicked off again as I fled.

Wifey is so much better at this than me, while I was busy thinking the grumpy little sod, she said “It’s upsetting because I don’t know how to help her.” If I’d been driven have as mad as wifey has by the incessant loud crying, I’d wouldn’t be so sympathetic!