As you may have spotted from the odd post on my blog, I am a bit of a film nut. At the moment this generally involves watching Titan AE, Up, Cloudy with a Chance of Meatballs and Tinkerbell on a continuous loop but it’s better than nothing and a small price to pay for two mostly adorable children.
We’ve recently instigated Saturday Night Movie Night to see something a bit more grown up (I wont use the word adult as that has an entirely different connotation!), so our blu ray player is getting a bit more of a workout. Which is nice and civilised at the same time.
The Boy and I have been pretty lucky this year, we’ve been to a fair few preview screenings of kids films. I’m sure as he grows up he’s going to wonder why all cinema viewing isn’t done in 20th Century Fox’s private cinema at Soho Square.
It’s odd then that the first time we saw a 3D film was a couple of months ago when we were invited to the West End to see Despicable Me. I fell foul of 3D in the 80’s, and the beginning of its recent reintroduction via some 3D horror films just had me thinking “Gimmick” loudly.
Too many axes coming out of the screen at you, too many forced stabbings and scenes composed and included purely to be 3D put me off to be honest. A film, even a bad one, is about visuals and story to me and to put one in front of the other because of 3D marked it out as a gimmick to me.
Well, I’m a big enough man to admit when I’m wrong. Despicable Me was was great fun and the 3D wasn’t too in your face. The flicker of the passive 3D system wasn’t brilliant though and I didn’t realise it didn’t work properly if you didn’t keep your head level.

Panasonic invited a few bloggers to Pinewood Studios to have a shufty at some of the new Viera 3D TV’s and blu ray players that are out soon. Sadly as a result of this trip my house isn’t full of brand spanking new Panasonic gear but we did get our travel paid for and the pastries were very nice. Perhaps I can put the expenses towards a nice new 42inch 3D plasma telly. Lordy, it was impressive.

Panasonic use an active 3D system for their tellies, which in many ways is better than a lot of what is used at the cinema with polarised glasses. Some of the footage we watched, like excerpts from the Olympics in Bejing and Moon River in concert were really subtle. The technology was used to enhance the experience rather than being the experience in itself.
Panasonic make a big thing about being involved in 3D from “glass to glass”, they make the cameras that shoot in 3D, provide editing facilities, 3D mastering, blu ray production and the TV to watch it all on. In fact pretty much the first chap to fiddle with their cameras was Mr J Cameron. You might have heard of him, he made one of my favourite films, Aliens. Apparently he’s made some films since, including one about a large boat sinking, and another one about some blue skinned dudes that don’t wear much. The latter is of course Avatar, the highest grossing film of all time and one that’s lead a lot of people to re-evaluate 3D.
Plonking the 3D glasses on and synching them with the telly immediately had me wondering why we put up with the passive 3D at the cinema. It’s in a different league, no flicker, you can hold your head at whatever angle you like and the picture isn’t disturbed. 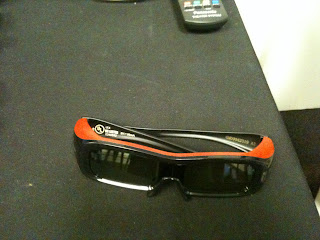 HD tellies have come a long way since they were first  released on an unsuspecting public. A lot of the early HD ready TV’s had poor contrast, didn’t do “proper” HD and showed poor standard definition stuff. Now days things have come on a bit though, and Panasonic boast that their plasmas will do 100,000 hours before the constrast drops noticably. A few years ago, it was a tenth of this and you had to contend with image burn (the Sky logo or whatever could burn itself onto your screen) which is now also a thing of the past. The 3D glasses are rather natty too, fit over normal specs, sync with the telly and just work. Kudos to Panasonic for doing them in 3 different sizes too, the smallest will do kids from 6 years old, sensible given the first batch of 3D blu ray movies includes Ice Age 3 and Cloudy with a Chance of Meatballs.

The big news, other than the awesomeness of their 3D TV’s and blu ray players, is that due to all round cleverness and their integral part in the whole 3D market place, Panasonic have exclusivity on Avatar on 3D blu ray until Feb 2011. So basically if you want to see Avatar in 3D, you’re going to be buying a 3D package from Panasonic, or waiting for a bit. From the kit I’ve seen, I can’t think this is a bad thing though. Panasonic are always winning awards for their plasma televisions and the stuff seems to work well- I’ve got an 18 year old 21 inch Panasonic CRT in the loft and it still works fine. Panny actually make all the stuff involved in their tellies too, they don’t buy the screens in from elsewhere and use the brand name to command a premium price.
So the one remaining biggie is the price. I wasn’t surprised that the 65inch flagship model cost over £4,000. I was surprised that the 42 inch model (TX-P42GT20B) costs a smidge over £1,100. You get a lot of telly for that money, and Panasonic also build in HD Freeview and HD Freesat to their televisions, which saves a few bob on a separate decoder (over £100 for each actually, which is scary). Needless to say, the new bundles on offer from this week are even better, offering the 42 inch TX-P42GT20B telly, a 3D blu ray player and surround sound system for about £1,500. Given the extortionate price the cinema costs now days, this isn’t all that much.
Panasonic in a couple of brief hours have thoroughly ruined television for me though, I’ve got to go home now and watch all the same stuff in standard 2D. Even the high definition stuff has lost it’s lustre.
Perhaps if I have a rummage down the back of the sofa I can scrape together a few pennies..