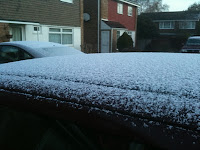 …. the onset of Fimbulvetr as the television would have it. Fimbulvetr, in case you didn’t know (and I didn’t until this morning, I was up very early and quite bored), is the harsh winter that precedes the end of the world and puts an end to all life on Earth, according to Norse mythology. Basically, it’s a hefty winter that comes before Ragnarok and the death of all the Gods.

Obviously the denizens that write and present the news are well up on their Viking culture because THIS IS IT! We’ve already seen people on the telly showing us which collapsible shovel we MUST have in the boot of our car to dig ourselves out of snow drifts. We know it’s getting colder as they’ve shifted poor old Carol Kirkwood outside, denying her the warmth of the studio because it might SNOW!

The media panic over all of this is always amusing but it’s the kids I feel sorry for. This is the first year that Fifi is old enough to really enjoy it (last year she just screamed when her hands got too cold) and the boy is avidly awaiting two feet of the white stuff to do his sledging again. I can’t help but think they’ll both be bitterly disappointed, thanks in the most part to the media frenzy over it all. As early as last week they were telling us we’d have snow in the South East by Wednesday. This then dropped to Thursday, onto Friday and is now a “maybe” for Saturday. Try explaining that to a small child.