I had Friday off work to do a bit of child-wrangling whilst wifey went to a course. Over the last three days I’ve spent about 15 hours playing with Lego and have hardly watched films at all with the boy. Bit of a change here then. Every week that passes sees the boy develop. His drawing is unrecognisable from the unrecognisable scrawls he did at Christmas and he’s no longer throwing his pens down in frustration after ten seconds. The same comes with Lego, it’s now all about the building and the role playing with the figures and spaceships now rather than sitting there and cajoling me to build things. Things are good, even though sometimes the tantrums are terrible, much worse than they used to be, generally the lad is behaving himself now he’s settled a bit more into school. 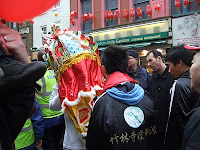 We went to London this afternoon to see some of the Chinese New Year celebrations. The streets were packed but both the kids were well behaved, Fifi in the pushchair and the boy both in the chair and holding my hand. We got the two of them balloons at Trafalgar Square, which frankly, kids being kids, was probably the best bit of the day for them. It was so crowded, the best we saw Dragon wise was from a distance and with the boy perched on my shoulder. I was dead careful with the balloons too, tied round wrists and held out of the way. I saw so much joy in the boys face, gales of laughter, a skip in his step and a happy chatter to his voice.

After all the care and attention, the string snagged on some railings, dislodging the balloon which drifted off into the distance. Oh no! There was wailing, heartfelt and long. Wifey thought he was overreacting and it was just a balloon and he was overreacting but I think the wailing was something else. To my mind the balloon was a facilitator of joy, that groovy thing that we forget how to experience as we get older and more grown up. I genuinely don’t think he was upset by the balloon going but the opportunity to be joyful floating up and away.

Fortunately, a state of equilibrium was restored with chocolate buttons but that was the end of the gleeful capering, and we trudged back to the car, home for more Lego, dinner and bedtime.