Yesterday I found out my half brother Russell had been found dead in a caravan he’s apparently been living in. My mum left this piece of information for me in a note which I spotted and read before she had the chance to leave after she’d been looking after the boy. She’d found out the day before when her other granddaughter phoned her in tears to tell the news.

At the moment that’s it, there’s no further information, whether it was murder, suicide or a terrible accident, only the cold hard fact that he’s dead.

I didn’t know Russell really, I have faint memories of a boy dressed in unfashionable clothing (unfashionable by today’s standards but obviously quite in at the time which would have been the late 70’s) when I was little. My mum had him when she was very young and didn’t have me until a good ten years later I think. I don’t know for sure, it’s somewhat of a mystery since it’s never something my mum has particularly wanted to talk to me about so, being a bloke I’ve never pushed. In fact, I think she’s mentioned more in passing to wifey over the years than she has to me really. Perhaps talking to someone you haven’t brought up yourself is easier.

I do know from snippets that my mums first husband wasn’t very nice to her but that’s about it. Certainly, as far as I know, aside from the few fragmented memories from being properly little myself, I don’t think there’s been much contact between us as a family and Russell until fairly recently. I have no idea why, and perhaps in her own time my mum will want to tell me.

Some time in the recent past though Russell wanted to get back in touch with us all. He had several long conversations with my mum and expressed an interest in meeting me and my brother, as well as wifey and the kids. At the time I was ambivalent to it all. Although he was blood by dint of a shared mother, was he really a relation to me in any other way? I didn’t think I was particularly interested in meeting him, after all I have met quite a lot of extended family at various events and it’s always been a bit awkward.

Which makes it odd that the first thing I did once my mum had left yesterday was promptly burst into tears. It turns out that maybe at some point in the future I did want to meet up with him and find out about him on my terms. Perhaps I wanted to see how much of my mum went into him and whether we were alike in any ways I could attribute to a shared mother. Unfortunately it took the possibility of this being taken away from me to realise what I wanted, which just goes to show what a blooming stupid bloke I can be at times. 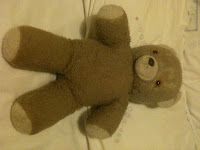 Of course there are real people out there, his Dad, his kids and his ex wife for starters, as well as my mum, who have all been much more affected by this than I have but I still can’t but help feel upset by it all.

I need another cuddle with my teddy….