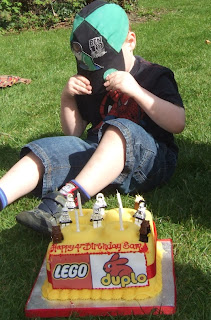 So our little boy isn’t quite as little any more. The weekend just past saw his 4th birthday and I can’t quite believe how big he is now. At times he can seem quite grown up, at others he’s just a shy little boy who needs hugs and support from his mummy or daddy.

We did him a little party in the museum’s garden for his friends. Nothing too elaborate (although wifey worked her socks off organising it), some games, a treasure hunt a buffet and thanks to their incredible genoristy, some races with a few happy hopperz. All the girls predictably fought over the pink one, whilst the zebra was the bounce of choice for the lads.

As ever the lad was quite shy at the start but by the end he was running around like a loony. We don’t think he was brilliantly well yesterday, which may have accounted for some of his subdued nature but the excitement of birthday had woken him up a couple of hours early after going to bed later than usual the night before, so that probably played a part too.

He’s never great communicating to us what he’s done or what he’s enjoyed, so it was interesting to hear what he had to say to our childminder this morning. He detailed his highlights, which included his Lego Party Cake, his Hotwheels Battle Force 5 Sabre car (the newest bane of my life, aimed at 4+ and fiddly enough for an adult to have trouble with), and the treasure hunt at the museum, and having his friend round after the party to play for a bit. It was a stream of excited dialogue that went on for ages and it was quite an eye opener as to what he finds important.

My non child related highlight was being told that the party that some of his friends had come from, the one I mentioned before, wasn’t as good as the boys. Not that I’m competitive but if someone knowingly organises a party ten days away from their kids birthday on your childs birthday, they deserve their just desserts.

It’s incredible how much the boys vocabularly has grown, even since Christmas,and this showed itself well in the exclamations as he opened presents. We opted for lots of smaller presents this time, and chose to mostly add to stuff he already had, so he got some more Lego, some more Imaginex and some Ben 10 action figures (all spread between us, grandparents and Uncles and Aunties). Of particular interest were the exclamations of “My God!” which wifey owned up to saying in front of him.

All in all then, I think he had a pretty good time. Unfortunately we’ve now lost our good behaviour lever with him. I wonder how many days there are until Christmas?