We had the fun task of explaining to the boy why I was off for 4 days over the Easter bank holiday. He was naturally suspicious as when I’m off for more than a normal weekend, we either i) go away somewhere as it’s our summer holiday or ii) he gets some presents as it’s Christmas. Well, as it turned out he got a small gift from his potty Nan to celebrate the death and resurrection of our Lord. 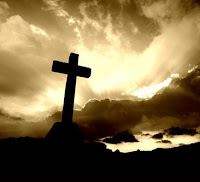 We attempted to explain to him what Easter was actually about. Or rather wifey did while I kept quiet and smirked at how hard it was to explain it to the level a 4 year old could understand. To be fair I did chip in when the going got tough. We thought it was important that he should know that Easter isn’t a rabbit & chocolate festival, despite what popular film and confectionery manufacturers would have you believe. Yes, no doubt like a lot of other Christian festivals, it nabbed the date from an existing pagan ritual (some sort of spring fertility festival in this instance), but since we’re calling it Easter and celebrating Easter, I don’t think that’s particularly relevant.

Starting with reminding him about the birth of the baby Jesus at Christmas, we went on to discuss how Jesus died and came back from the dead at Easter.

There was a long thoughtful pause from the boy, who then declared, “He came back from the dead, just like Superman did.”

Whilst he’s technically correct that Superman did indeed (on more than one occasion) get resurrected, the circumstances and nature of the respective resurrections were somewhat different, so in that respect I would pull him up on the “just like” part. I’m astonished he actually knows enough about Superman to know stuff like that- he is only just 4. It’s even more impressive since his interests as far as superheroes lie, falls mainly within the Marvel camp, and Supes is the mainstay of ultra rivals DC.

I think maybe this time next year we might invest in a preschoolers book about Easter, much like we did for Christmas. It undoubtably wont involve superheroes but might actually get the message across a bit better than we did.