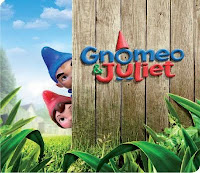 To celebrate the fact that Gnomeo & Juliet is out on DVD, Blu Ray and VHS (okay I lied about the VHS) on 2 June 2011, a few of us bloggers got invited to a private screening at the Apollo on Regents Street on Sunday. I even bumped into Cherished by Me in the Ladies toilet*.

A modern take on Shakespeare’s Romeo & Juliet, with gnomes, lawn mowers, voice talent such as Richard Wilson, Ozzy Osbourne and Jason Statham (!), and a really well worked sound track of Elton John numbers, this is a film that is so packed with invention, I really need to watch it again to see all the clever little things I missed.

This is all very odd in a way as the film is aimed at quite young children. Our two year old loved a lot of the slapstick humour but the boy loved the story as much. Unlike some films we’ve seen recently though, it had plenty to offer the adults. A gnome in a Borat style mankini with sunburnt buttocks, a slightly insane plastic flamingo, lawn mower racing that could almost have come from Grease and internet shopping were particular highlights for me. It’s an endlessly inventive film but it’s never too busy and always keeps it’s sense of humour.

The story follows the star crossed lovers , Gnomeo (DID YOU SEE WHAT THEY DID THERE?) and Juliet, who are a pair of gnomes and live in the blue garden and red garden respectively. There’s a feud going on between the two gnome clans, that gets in the way of the illicit love. You don’t really need to know more, the prologue says as much, and sets the scene quite wonderfully.

I didn’t go into the viewing expecting much I must admit but I came out with the strange sensation of actually wanting to watch the film again, not least to see if I could spot a few more of the vocal talent. The boy loved it and demanded to watch it again on Blu Ray when we got home. Sadly I had to let him down gently- it’s not out until the start of June. But when it is, we’ll be getting it!

*it’s okay, I’m not a perv, the gents were out of order so we all had to use the Ladies.