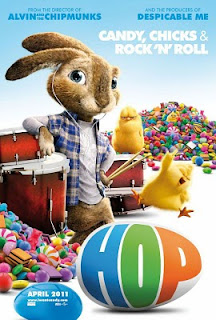 There are many things in the world that are a bit odd if you think about them too much. Hop is one of those things but it doesn’t stop it being a cracking film that should keep your kids entertained over the Easter break.

The whole Easter Bunny thing is a lot more developed over in America than it is here if Hop is anything to by and a lot of the logic of it went over my head- at times it seemed like Father Christmas with Rabbits and sleigh like contraptions at the wrong time of year- but then you don’t really need to follow the logic of a kids film when you have Russell Brand voicing a rabbit that drums along whilst singing I Want Candy.

If you can get passed the cultural baggage of Easter over the other side of the pond, Hop is a great film. I have to admit, from the posters I’d seen I didn’t realise it was a mix of live action and computer generated animation, and if I had I would have thought twice because at almost 4, the boy definitely prefers his kids films animated. I needn’t have worried though because he loved it, as did his two year old little sister. There’s just the right amount of slapstick for little kids to laugh themselves silly over, the Easter chicks are cute and nefarious by turn and E.B. is a great counter point to James Marsdon’s loafer character.

For adults there’s Russell Brand, which is great if you like him, less so if you don’t. Fortunately I like him  and he pretty much deliveries his usual sort of dialogue, without the sweary stuff he’s famous for. A lot of it will go over the head of the kids but that’s okay because he’s a funky rabbit.

At the heart of the film is a story of growing up and taking your responsibilities squarely on, both from the rabbit lead and the human but it doesn’t overly moralise and gets on with the action well.

If you fancy seeing a film with the Easter bunny in over the holidays, this is the bunny film to watch!