Out of the blue (well not quite, I do have a contact me button in my sidebar, so I should sort of expect this sort of thing), I had an email from Premier Inn a little while ago telling me in both an informative but chatty manner about their rather spiffing family rooms.

Without a single hint of Lenny Henry, they told me at the weekends you can book a room that sleeps a family of four for as little as £29 per night. That’s per night, not per night per person. To show how top their facilities are, and also to show that a lot of their hotels are cunningly situated by large family tourist attractions, Premier Inn kindly offered to put up the ‘Cool’ family in the Heathrow Premier Inn and also provided us with free entry to the nearby Legoland.

To make sure we tested the service properly and in no way got special attention, we accidentally turned up a day early. Asmir took this completely in his stride though, as he checked us in and gave us an empty family room. Check in was cheerful and easy. To make it as realistic as possible, we had come to Heathrow from Upminster, where we’d had a flight on the Goodyear Blimp. It was gone 7pm, both the kids were knackered and we just needed something easy. 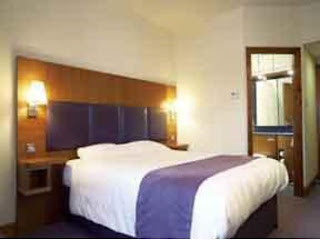 Fortunately it turned out very easy. The only delay to anything was the friendly staff constantly asking us if we were okay or needed anything. Our room was on the ground floor, was spotlessly clean and had three beds, one floor level and ideal for Fifi, all made up. We watched a bit of Corrie while the kids were washed and then settled down for a story. I popped to the in-hotel Costa Coffee to get a large milk so Fifi could have her bedtime beaker of whole milk. It was a very reasonable 75p, and the chap serving said they get a lot of parents asking for milk.

One nice feature was the secondary spy hole in the door at eye level for the kids, which to me summed up how well thought out it all was. We got a reasonable nights kip, the beds were comfy but all of us in one room and the excitement of the prospect of the trip to Legoland the next morning meant there was a bit of running around and bouncing until about 9ish. Fifi went to bed with her mummy and I meant to lift her into her bed (which I was lying on) once she’d nodded off. Unfortunately I beat her to it and was asleep before anyone, so she spent the night sleeping perpendicularly to wifey while I had an incredibly restful nights sleep. Even though the hotel is right next door to the airport at Heathrow, the secondary double glazing kept all the noise out.

Breakfast really set us up for the day, an all you can eat buffet of traditional cooked fair, cereals and fruit that set us up nicely for the day. Even the confused little old lady who querulously demanded to be given a continental breakfast as she didn’t know what went into one finished her breakfast happy.

I must admit I am a great fan of self catering but for the purpose of going somewhere for a day trip that’s out of day trip range, staying somewhere like a Premier Inn is a cracking idea. Legoland was less than a 20 minute drive from the hotel and I can honestly say I had more harassment from the kids wanting to leave at the crack of dawn than I did with our entire stay at the hotel.

Depending on where you stay, the rooms start at £29 per night, as I said, and eat in breakfast is £7.99 per adult (kids free), with parking at a tenner in London, and £6 elsewhere. From my BC (Before Children) days, I think that compares very favourably with a B&B, with the added benefit that B&B’s wont let you stay one night at the weekend without some sort of horrific surcharge. And if you’re lucky, you wont bump into Lenny Henry either!