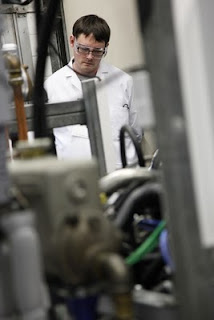 If there is one completely irrelevant thing I learnt from my attendance at the Shell-V Power Network of Champions two day event, it’s I look damn sexy in a lab coat. As evidenced by the picture to the right. The photographer has immediately made it on to my Christmas card list, even if he hasn’t used a spider to colour calibrate his monitor .

Fortunately there were many relevant things I learnt whilst a guest of Shell too. I’ve always been a bit interested in science, ever since I managed to scrape a C grade at A level chemistry, so it was interesting to see and hear some things that went outside of the theoretical and into the practical. It was certainly better than desperately trying to grasp some of the more theoretical parts of physics that crop up in some of the science fiction I have a habit of reading.

One thing I’m still struggling to get my head around is the engineering involved in the internal combustion engine, particularly those of a diesel variety. The precision combined with the requisite strength in things like the injectors, which operate under the pressures many times that which would crush a submarine on the ocean floor are really mind blowing. In a modern diesel car engine, the injector holes can typically be as small as 100 microns in diameter, which is comparable to the thickness of a human hair. If a diesel engine is operating at 3,000 rpm, then that means fuel is being injected into each cylinder 25 times every second, or about 17 times per second at 2,000 rpm. The actual injection of fuel itself takes place in about 2-3 milliseconds (2-3 thousandths of a second) and thats a shorter period of time than even my tolerance for watching Dora the Explorer, for some sort of context. It’s still not as short as the shortest recorded human event, the New York Second (the period of time between the lights turning green and the taxi behind you standing on it’s horn in New York). Given the ludicrous precision of all of this, it sort of stands to reason that if things get dirty, they’re going to struggle to work as they should.

I think it was the great Arthur C Clarke who once said, “Any sufficiently advanced technology is indistinguishable from magic.” and to a degree some of the engineering feats that surround us on a daily basis in our cars are pretty close to witchcraft as far as I’m concerned.

I’ve never actually owned an oil burner (as apparently trendy people in the know refer to diesels as) but I do know from the garage forecourt it can be a messy bugger if you spill it. Seeing a disassembled diesel engine that hadn’t done an inordinate amount of mileage really made me think how this mess can affect an engine though. The timings involved in making combustion work are very precise and a number of things can disrupt engine operation leading to incomplete combustion. What this in turn leads to are deposits and the infamous snigger triggering situation where Shells lead fuel scientist warned us of the perils of “dirty holes”.

Basically deposits (carbon based if you’re interested) can build up on the teeny tiny holes in the injectors. Since these are exposed to both extreme pressure and temperature, the deposits are durable little buggers and they don’t get shifted on their own. After time they can really reduce the efficiency of the engine by causing non optimal combustion, leading to a loss of power and a related reduction in economy since an engine working harder to do the same thing isn’t going to be as efficient.

Something similar happens with petrol engines although it doesn’t always involve injectors because older (or my Seat Ibiza’s case traditional) petrol engines don’t have them. Something else I learnt! Instead of the injectors that aren’t there getting coated with deposits, the inlet valves to these older engines get gunked up. The end result is basically the same though, the engines efficiency takes a knock and it loses power. 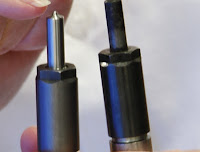 In modern petrol engines you will apparently find a fuel injection system. Fuel injection is now the principal means of getting petrol into the engine, and has essentially replaced carburettors. This is obviously bad news for Silver Hatch Race Track, since Roary and co are now owned by the very outdated Mr Carburettor. In these modern engines, the problems are very similar to those found in diesel cars.

Shell V-Power Unleaded is formulated for a powerful cleaning action to help prevent these deposits forming in the first place and to help clean away power-robbing deposits that may have been left behind by other fuels. By doing this Shell reckon their Shell V-Power Unleaded can help to keep new cars performing like new for longer and restore power and performance that may have been lost through deposit formation. Think of it like your toddler running around with an enormous poo sitting in their nappy against a nice fresh clean one. Or don’t, it might give you post traumatic stress disorder. I just had a flashback that’s left me needing a nice cup of tea.
The unique blend of additives that Shell V Power diesel and unleaded has in it does some clever trickery via the medium of detergent to remove these crusted on deposits in both petrol and diesel engines. The boffins reckon after about tank fulls the difference becomes noticeable, as you can see from the image on the left. One of those injectors looks a bit grubby and the other doesn’t. Have a wild intuitive stab in the dark as to which one comes from an engine run on Shell V Power (hint it’s not the grubby one).

It’s certainly been an eye opener to me and it did get me thinking. I asked the head sciency honcho if fuel differentiation was like digital camera differentiation- basically determined by the marketing department. Camera makers have a drive for higher and higher megapixels which doesn’t equate to better pictures (stuff like lens quality, sensor size etc are equally as important) but simply allow them to market their stuff as better. He said he couldn’t comment on the opposition (which is fair enough since other fuel companies wouldn’t have had a right of reply) but felt that the stuff they put in makes a real world difference. Since I didn’t know what the differences were before I was asked to take part in the Shell V Power Network of Champions I suppose he’s either speaking the truth or the marketing dept need to be taken outside to the car park and booted round it :)

Either way I’ve invested a few of my hard earned pounds in filling both our cars up with the stuff to see if it makes a difference. Apparently given the many different engines and configurations out there, Shell can’t give a hard and fast answer to when I should see a difference, but I’m reliably informed that I should see a difference after 3 or so tanks. So I’ve decided to ditch the supermarket petrol and put my trust in the boffins at Shell. I’ll let you know how I get on…

This is one of a number of events Shell have invited me on this year. Although I’m not being paid to take part, I am getting access to some things that are exciting and more than a bit exclusive but I have made a promise to myself to be impartial, otherwise what’s the point? As I’ve mentioned before they are genial hosts but they were also very open to questions. I’ve gathered a few from tweeps and blog comments and will be putting those to the boffins shortly. I like to think that I’ve a questioning mind (I am after all the person who has to rationalise the science behind idle day dreams), so I don’t tend to take easy answers and habitually ask off the wall stuff at the drop of a hat. So if there is anything you’d like me to quiz Shell about, do ask, as I’m more than likely to prod them with it!