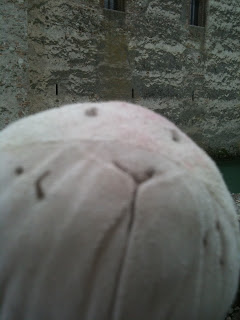 A Daddacool holiday is never a dull affair and this one to Altominicio in Italy courtesy of Thompsons Alfresco certainly lives up to the billing. Our last proper holiday abroad had abandonment by the tour rep in a hotel just shy of the Atlas Mountains as I developed a nasty case of dysentery. We were left in Morocco (a nice country, with really friendly people) on our own, with no phone or access to a doctor (none of the staff had more than rudimentary English).

Before that I third degree burned my knee at a Korean BBQ restaurant in Sydney, since then I’ve dropped the Boy’s favourite soft toy, Bun-Bun, off the Walshingham Light Railway (recovered on the return trip), and last summers holiday ended after two days with the pox (of the chicken variety) descending on both kids, with their grandparents having not had it.

So it’s no surprise really that we’ve had two episodes of excitement so far this holiday. Bizarrely, both of them happened near the same town but on different days. On the first day we actually failed to find the city centre of Simione,thanks mostly to a mixture of roadworks and interesting signage. But that wasn’t the actual disaster. Oh no, nothing that easy. We were approaching a roundabout and the car behind began tooting. I thought it was because I was driving a little slowly, so decided to loop the roundabout and let them overtake me. It turns out it was actually due to the wee lass opening her car door, which proceeded to swing fully open on the roundabout. There are many things I love about the Skoda Yeti (apparently a Mercedes Class A substitute as far as the car hire people were concerned) but its central locking isn’t one of them. I eventually sorted the lock out by engaging the child safety catch but I still can’t get the central locking to actually lock us in.

The second Simione related incident happened today and had the potential to be a little more traumatic than the mere opportunity to lose a car door. We had just done a great boat tour of the island of Simione (is it an actual island or just a peninsular that’s been artificially cut off? whatever) and been around the castle. A quick trip down to the lake side ended with a gentle stroll back to the car half an hour before the parking ran out. As I strapped the boy in, the words that will forever send a chill down my spine occurred  “But where Bun-Bun? I can’t see him anywhere.” Oh lawks, we had lost Bun Bun somewhere in a fortified town that had the largest Roman ruins in Northern Italy, as well as a castle.

A deep breath (for fear of passing out) and I told everyone to stay put in the car and I would find Bun-Bun. I pelted it back in the humidity and everything, all the way to the furthest point that we’d walked to without stopping once, the blood thumping in my ears. Right down to the lake front. Right up to Bun Bun who was still sitting on the bench where a small boy had left him.

I ambled back with a stitch and a severely sweaty t-shirt to find everyone on a bench having a fruit juice. The boy look unconcerned, the initial panic in his eyes gone because his daddy had told him Bun Bun would be found. It was then that it really hit me, the complete trust in my competence that only a small child could have. Parents are indestructible and omnipotent and the day you find out their just real people, the world gets a little greyer. Of course, if he wasn’t 4 and had any level of discernment, the Boy would have realised I was a jammy bugger and it wasn’t down to my god like status….