There are plenty of things to do in St Albans. I’ve lived here for 10 years now, with and without children and come rain or shine we’ve always found plenty to keep us busy in St Albans.

Here is a brief guide to show you a few of the things that will keep you entertained on a day out in St Albans:

Parks
The most notable park in St Albans is Verulamium Park. This is set in acres of land and as well as having a great view of the Abbey, home to the remains of St Alban, England’s first Christian Martyr, it also has a rather nice set of Roman ruins and a covered Roman Hypocaust that is generally open when the Museum that nestles in the corner is open. The lake is home to coots, moor-hens and herons as well as the usual ducks and is well worth a walk around. If you’re looking for things to do in St Albans, it’s always worth checking out the councils what’s on page, as it details events in the park.
Clarence Park is situated closer to the train station and whilst not being as large as Verulamium Park, is often the scene for outdoor performances and is surprisingly tranquil for a park in such an urban location. It’s also home to St Albans City FC, who are on the up and up since they got new owners last year.
Museums
St Albans Museum Service runs two museums in St Albans, Verulamium Museum in the corner of Verulamium park, and the Museum of St Albans on Hatfield road, at the top end of the town centre. 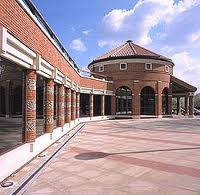 Since St Albans was one of the largest Roman settlements in the country, Verulamium Museum caters to the Roman side of things. It’s impressive enough that during term times, coach loads of school kids come from all over the country to tour the museum, meaning it can be somewhat crowded. There is an entry fee but it’s well worth paying as you’ll see excellent objects and interpretation.
The Museum of St Albans hosts a variety of temporary exhibitions and the social history collection. Entry is free and it is well worth a trip if you want to know more about the social history of a very old town.
There are other museums in St Albans that are not run by the city and district council, like the Organ Museum. Opening times are limited though, so it is well worth checking their rather colourful website before embarking on a trip.
Unaffiliated with the museum service but right next to the park is the Roman Theatre of Verulamium. This is on the estate of Lord Verulam, so a separate charge is in order to see the ruins but unless they’re closed for shooting or something else, you can walk up the drive and around a lot of the grounds of the Gorhamberry Estate.
Pubs
If you’re out and about and fancy a pint or some pub grub, you’re very well catered for in St Albans. It has all the usual chains if you’re not feeling adventurous but since the city is the home to CAMRA, the campaign for real ale, if you fancy something a bit more interesting, you will be in luck.

A good place to start is in St Michaels village which has a string of pubs from the Rose and Crown right up to the Lower Red Lion. The Lower Red Lion usually has a beer festival running over bank holiday weekends but if you twist the landlords arm he will sell you a Peroni.

Up into the town, you will still find a lot of hidden gems on side streets, like the Farriers Arms, the Garabaldi, the Goat and the White Hart Tap. Finally, there is also the Horn , which really comes alive in the evening as a music venue. It’s even won the music pub of the year award a few times to boot.
Those are just a few of the pubs you’ll find in St Albans, a flavour really. There are plenty more and you can’t really go wrong with most of them.
Restaurants
Most of the chains are present in St Albans, from Pizza Express to Zizis but you wont find a McDonalds or Burger King in the city centre. Of more interest are the local restaurants, offering great food at a variety of prices from the affordable to the eye watering.

If you like Italian food, then Cosa Nostra on the Lower Lattimore Road should be your destination of choice. It’s a small family run restaurant that has been going for about 20 years. The pizza and pasta are great, the venue intimate and the service is very friendly.
If you like great traditional English food, you’re also spoilt for choice in St Albans. Two restaurants that you should definitely check out are Darcy’s and Lussmann’s. Lussmann’s describes itself as a fish and grill restaurant but that really doesn’t do it justice. Check out the locally sourced ingredients and the chef’s passion for proper food, and it will give you an idea about the quality of the meals on offer. Darcy’s offer a modern take on traditional fayre and are also keen on sourcing fresh ingredients.
If you prefer Thai food, Thai Square actually won an award from the Thai Tourist Board a couple of years ago for its Thai food. Having said that, Thai Rack, which is just around the corner, also does excellent Thai food, so you are really spoilt for choice.
Curry lovers are well catered for too, with Devdas being the cream of the crop, although extensive personal research has shown you genuinely can’t go wrong in St Albans if you want a curry.
Finally, and a bit of a left field eatery, is the Waffle House. This is situated in an old water mill adjacent to Verulamium Park. They serve a selection of mouth watering sweet and savoury waffles. Bookings are not taken and be warned, they are extremely busy in the summer.
Other
Days out in St Albans with the kids are amply catered for too. If the weather is nice, a trip to Willows Farm is a great way to spend the day. There is plenty to do for kids of all ages and since it’s situated right next to the motorway junction, if you don’t fancy popping into the town, you can avoid all the traffic.

The Abbey Cathedral of St Albans is also well worth a visit. it’s apparently the site of longest continuous Christian worship in the country. It’s a real hodgepodge of architectural styles, so you’ll not really see another cathedral like it. The tea shop is also worth a visit as their cake, whilst not officially being divine, is really nice.

So there you have it, something for everyone and hopefully something to inspire you if you’re still wondering on things to do in St Albans!