I must win an award for the worlds latest Cybermummy post. I’m cool with that, I work to my own timetable and it’s not as if it’s about to clash with the next one is it?

I must firstly say thanks to Appliances Online for paying for my ticket, and for not making me go dressed up as a fridge freezer to pay them back. Within about 15 minutes of tweeting who wants to buck the trend and pay for a bloke to go to Cybermummy, I’d already been offered a ticket. Which was nice.

Logistically the day was a bit interesting because we had to dump the kids (2 and 4) at my mum’s before heading up to London. We had to drop them off early enough so as to not miss the start of Cybermummy but late enough that they wouldn’t have the kids for too long (they are in their 70’s after all. My parents, not the kids, obviously). We therefore had to catch the 8.47 from Broxbourne which would get us into Liverpool Street at 9.15, leaving us 15 minutes to walk to the venue.

Things started off well as the pay and display machine at the station was broken. On closer examination it was blocked with two pounds coins (the machine didn’t take them), so I was able to extract them with the special £2 coin extracting device on my Swiss Army knife. So far we were over a pound up on the day- result!

I’ve been part of the parent blogging community for a couple of years now and since I was fairly confident of being around a foot taller than every other attendee bar Tim I wasn’t particularly nervous. As I said to some poor mum I cornered, I’m either the worlds most shy retiring type in the corner or the worlds worst boor. I don’t think I was shy and retiring, so you’ll have to accept my belated apology if I cornered you! 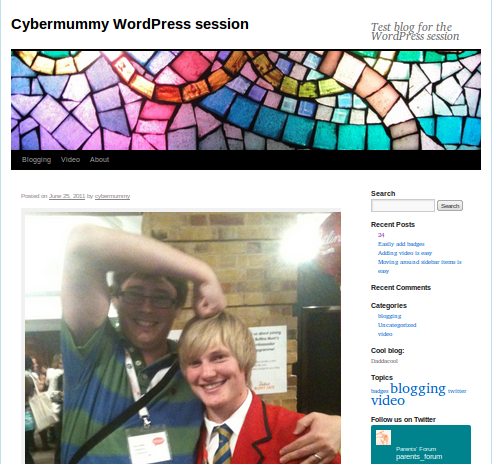 The breakout sessions were exceedingly hit and miss and on more than one occasion I found myself stuck at the front or back of a session I would have liked to have snuck out from. Most of the problems with the WordPress session were IT related but after I was told off during the Q&A for answering a question the speaker couldn’t (I thought the point of Q&A’s were to answer the questions, not just tell people to look at FAQ’s), I decided to get my revenge with a little bit of light hearted hacking. The session leader had used a dummy website to run through a few of the things she was talking about and I’d noticed she had simply cut and pasted her username into the password field, so decided to play a prank, the results of which you can see to the right. Gary, the Butlins redcoat from the MAD awards was happy to pose for the photo!
Otherwise, I think the best session involved Natalie Lue’s talk on making money with your blog, although if I wore a hat I would definitely take it off to the chap from Wikio who was taking questions on marketing your blog/extending it’s reach. Eventually, in a very Gallic fashion he got the slight hump and said, “How many times do I have to say it? You increase traffic to your blog by providing quality content.” Amen brother!!

It was nice to catch up with old friends (Sally, Jen, Deborah, and loads of people I don’t mean to offend by not mentioning) and meet people I’ve chatted to on twitter but never actually met. Fortunately only The Mummy Life has any incriminating photos of me. There were more chaps there than I anticipated too, although aside from a quick chin wag with Tim, I didn’t get to talk to any of them.

I almost talked to Josie but she seemed very popular with everyone (understandable I suppose), so we just did the “do I know you” slight frown at each other from a distance and left it at that.

I did get to have a chat to Liane Katz, from the Guardian, who distilled the ten minutes of rambling I inflicted upon her to a couple of lines that made me sound wise in the article on the Guardian’s website she penned about Cybermummy. If I was rich I’d hire her permanently to make me seem more intelligent (and intelligible) than I actually am.

We skipped town before the after show party to pick the kids up and get them home before murder was committed. Not before I’d won a Nintendo DS in the Disney Cars 2 time trial competition though. Hurrah!

I enjoyed myself and I think I would have enjoyed myself dramatically less if I’d paid over a hundred quid to go but then we’ve got an old fashioned view of money and are saving up hard for a new bathroom suite at the moment.