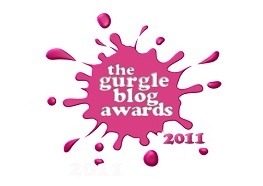 The finalists for this years Gurgle blog awards have been shortlisted and are available on the Gurgle website. I’m proud to be a finalist in the daddy blog category but I’m even more pleased to note there is a dad’s category this year.

Obviously in the vast majority of cases, women are the primary carers. I know at least one of the dad’s shortlisted bucks this trend but generally I suppose the relatively small number of dad blogs in comparison to mummy blogs reflects this.

I’ve been parent blogging for well over two years now and the opportunities it’s opened for me have been astonishing really. I’ve been invited to write for the Guardian’s Comment is Free on paternity leave, I’ve interviewed Jo Wiley and I’ve driven Ferrari’s round their private test track in Maranello. But if you’ve read much of my blog, you’ll see the vast majority of my 400+ posts are about the boy and Fifi (she’s not really called Fifi you know, that’s what her brother called her before he could pronounce her actual name) and they give a great history of what my family have been up to.

Voting opens today at the Gurgles website and I’m going to buck the trend and not ask for you to vote for me. If you want to, that’s great but I’d rather you just check out all the dad’s blogs and voted. I think it would be ace if the dad’s category got as many votes as all the others!

So who else is short-listed? Well…

Garry blogs at Him Up North, I follow him on twitter and often follow musical recommendations. He’s Northern (obviously) but I lived in the North of England for 4 years so I don’t need a translator. He’s dead honest in his writing but also has a cracking sense of humour. I doubt I really need to recommend his blog because it’s one of the most popular parent blogs any way :)

The Life and Times of a House Husband is written by Jamie, a fellow Arsenal fan. He’s (so far) the only other nominee I’ve actually met in real life and the phrase “sound as a pound” fits perfectly. He’s also a really funny bugger. His latest post, Crime and Punishment, had me reading out chunks to wifey and making notes for future reference.

Daddynatal is Dean’s site and is a bit different from the rest of us. Although there is a blog element to his site, the overall theme is educating Dad’s about parenthood. Dean is the only fully qualified male Antenatal Educator in the UK, as well as a parent and is passionate about what he does. He’s also a friendly so and so and has given me some useful pointers over twitter in the past.

Finally, there’s Jonathan’s blog, the Daddy Diaries. This is a fairly new blog but don’t let that distract you, anyone that joked with his best mate that he was going to call his first born “Pippin Casio”, and was believed for any period of time, however short, is well worth taking a gander at.

So there you go, have a shufty, find some new blogs to read and vote for a dad, I’m sure we’ll all appreciate the attention :)