The boy is rapidly approaching the end of his first term at school. I’m not 100% sure whether reception counts as the first year of school or not but I’m going with it. The constant bids for freedom that were his signature mark at nursery seem to have abated somewhat and aside from the odd incident with scissors, he seems to be pottering along nicely.

We’re working on his letters and reading at home, and it’s slow progress. I was heartened recently when a work colleague said her sons school only gave the kids picture books with no words in reception. 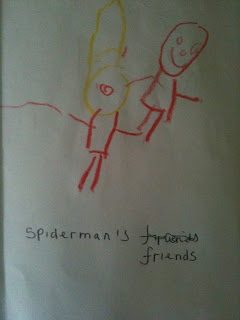 The boys love of action and adventure and superheroes is helping here, he seems a lot more inclined to do educational stuff if it’s tied to subjects that interest him. It reminds me a bit of some of those cringe-worthy public information comic strips Marvel and DC used to run in the 1970’s about stranger danger or smoking. Fortunately Marvel do a Spider-Man comic that’s aimed at his age group, so we have a bit of help there.

Even so, I can’t help but feel the school are letting the side down when their classroom assistants make a basic error on a comic strip the lads drawn. And no, I’m not referring to the incorrect spelling of Spider-Man, with a hyphen. The boys lovingly crafted 5 page comic strip is defaced on the very first page with a large crossed out attempt by the classroom assistant’s to spell the word “friends”. Any bonus points for the correct use of an apostrophe disappeared out of the window with that!

Still, it could have been worse, a year ago, he would have screwed the whole thing up in frustration and thrown it in the bin, so at least we’ve had progress there!

It’s funny really, for all the effort we put into trying to find out what’s going on at school, we’re met with a stonewall of “Not anything. Can’t remember.”, so we only really get to find out when he brings some of his creations home. In case you’re wondering, those two are Spider-Man’s friends. Spider-Man himself is on page two.