The “lad’s room” has moved once more. Ever since Mrs Cool and I moved in together almost ten years ago, there’s been what we’ve referred to as the lads room. Initially it had computers and other multi use stuff in it, but once we both got laptops/netbooks, the need for a proper desktop computer sort of disappeared and the lad’s room became a proper den.

A rummage around in my parents loft helped matters and it wasn’t long until I had a few retro videogame machines set up. A Sega Saturn, a Sega Dreamcast, a Megadrive were joined by a Turbo Grafix 16 and SNES. The games were all arranged on a shelf, alphabetically by device. I even managed to put up some Daredevil and Spider-man posters. I never did have the nerve to put up my Pink Floyd posters for some reason though.

When we moved to our current house and started a family, I got to keep the lad’s room. Eventually when Fifi came along, I got kicked out of the third bedroom into the box room. When we accumulated an inordinate amount of (kids) stuff, the room became another dumping ground, and the gaming stuff was pretty inaccessible. And now that baby number three is rapidly approaching the world, even an inaccessible lad’s room is a wistful thought. 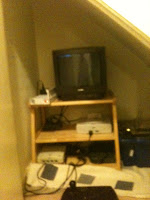 Fortunately I’ve been relocated. That’s right, Harry Potter-esque, I’m now living in the cupboard under the stairs. So far I’ve only got the Saturn set up but the trouble kicked in when I booted up Steep Slope Sliders. The four year old spotted what I was up to and wrestled my arcade stick off me. 40 minutes later, after I’d broken up half a dozen SHARE arguments between the boy and Fifi (who at two and a half is more than capable of holding her own), they finally lost interest and left me to it. Or so I thought. I nipped upstairs to get a crate of games and when I came back, I found interlopers had moved in. A box of Lego Princess Duplo was nestled next to some Imaginext, indicating that the child equivalent of a badger marking his patch had occurred.

I can see this fight is going to be ongoing. Next stop, the summer house…