A couple of weeks ago I was lucky enough to be invited to Legoland Windsor for a bit of an exclusive tour of the exciting new hotel they’re building. I dropped the wife and kids off at main gates so they could be refused entrance to all the rides (one parent per one under 5 apparently) and donned a pair of steel toe capped wellies and a high vis jacket. Steel toe capped wellies are new to me but super awesome.

The hotel itself isn’t open until the spring but the structure is finished, it’s just the fitting out that needs to be completed. Fortunately for us there were a couple of rooms furnished to a more or less complete standard to give us all an idea of what to expect. As you can see from the photos, the rooms are pretty epically Lego. In fact I’d go as far as to say you had better completely exhaust your children in the theme park before harbouring any faint idea of getting them off to sleep. Theres Lego furnishings, carpet and wallpaper (in the premium rooms, the normal rooms get everything bar the wallpaper), Lego wall hangings, a locked treasure chest with a small Lego gift in it if you can solve the clues to open it. And that’s just in the rooms. They’re themed in one of three styles, Pirates, Kingdom and Adventure. One of the things I liked was how kid friendly it all is, the doors have peep holes at kids levels, the counter in the bathroom is low enough for children to use and the shower has a separate detachable head for ease of use by little kids. 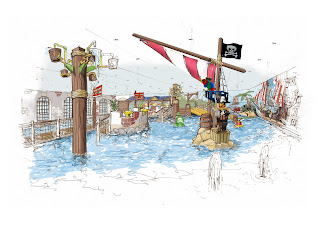 The lobby was a concrete and MDF shell when we saw it but the concept art was pretty easy to visualise how it would look. Pretty much like a Lego themed Charlie & the Chocolate Factory in fact. This is continued through to the rather fab indoor swimming pool. You might have guessed that since Lego have a nifty pirate theme going on, that this would be a good fit for the pool…

Prices range from £247 low season to £385 high season for a themed family room (2 adults / 2 children). This includes breakfast and park tickets for two days. Guests will also enjoy special Legoland benefits including early bird access to the park. Premium themed rooms and suites, as mentioned above, are also available. Annual Pass Holders will be eligible for special rates, although details of these haven’t been released just yet. If you just turn up on the door at Legoland, you can easily spend £150 or so getting in, so in terms of a weekend break these prices look extremely competitive. They’re certainly no different to somewhere like Center Parcs, the bonus being you get to spend all day going round and round on the Dragons Apprentice until you’re dizzy and can’t stand up.

The hotel opens in March 2012, but you can already pre-book rooms if you want to.