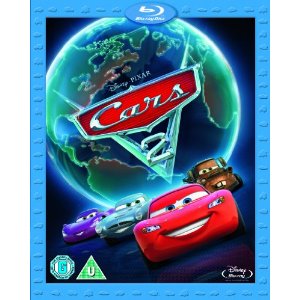 Cars was unashamedly the story of Lightening McQueen but Cars 2 surreptitiously almost tells the story of his goofy sidekick, Tow Mata. Yes, I’m slow and didn’t pick up the pun during the first film. The animation is up to Pixar’s usual standard but the racing is really a subplot in this story, a bit odd given the fact it is after all about cars. The story follows a plot by a nefarious underground cartel to discredit bio fuels, headed by a mysterious figure who is, in spy film tradition, unmasked in the final scenes.

There are some great cameos, particularly from Michael Cain. Since Michael Cain can’t really act, and has only ever really played Michael Cain in any film he’s been in, it’s great to see a Michael Cain car being, well, Michael Cain. He pulls it off brilliantly. The action sequences are as good as anything that’s about and the visuals are nothing short of astonishing. Perhaps oddly though, our 4 year old didn’t take a shine to it, he still prefers watching the original Cars. Our soon to be three year old though loves it with a passion and it has (temporarily?) displaced Dora the Explorer as her television of choice.

From a parents point of view, like any Pixar film it’s watchable and even enjoyable but I’m with the boy, I didn’t enjoy it as much as Cars. Perhaps it’s the slightly heavy moral to the story; “Don’t judge people on looks”, but I must say I enjoyed the tractor tipping and general stupidity of the original more. That probably says more about the original film and how it was fresh than it does the sequel. Generally, sequels aren’t as good as the original and that’s not really different here.

Whilst the highlight for Fifi is undoubtedly Tow Mata, I must say the outrageously rude French F1 car is a particular highpoint for me. This did lead to a rather long and involved discussion on twitter about why it’s always the French that get to be the comedy rude characters in motion pictures but I digress.

Cars 2 is available now on Blu Ray and DVD. If you’re so inclined you can take Amazon up on their very generous price of £14.49.