I have a confession to make: I’ve never read a Harry Potter book. I have however seen all the films up to date, and so when I was offered an early chance to get my mitts on the final film on Blu Ray, I jumped at the chance. I mean who wouldn’t? Since kids, we’ve not made it to the cinema as often as we used to (ie not at all really aside from Kids Club on a Saturday morning), Blu Ray is the best way we can really watch films that aren’t suitable for kids. 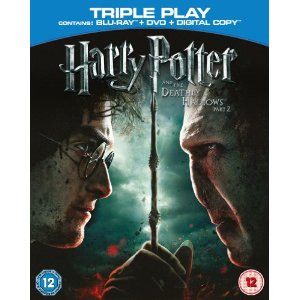 I actually have a further confession to make, two weeks ago on a long haul flight, I opted to watch The Goonies rather than Deathly Hallows Part 2. This was because I knew we had a copy on the way. The person sitting next to me was watching it though and I did keep getting glimpses out of the corner of my eye. With no sound and only the occasional glimpse, it very much seemed like it should have been renamed “Harry Potter & the People Standing Around Looking Vexed“. Fortunately the addition of sound also added some sense and drama to it and I’m happy to say (as a viewer of the films at least) it’s a good finale to the series.

I don’t want to give the plot away too much ( who would watch this film without having seen the preceding 7 anyway?) but the whole film is pretty much the Battle of Hogwarts, leading up to the inevitable final battle between Harry and Voldemort. Despite the subject, the film does manage to vary it’s pace and drama though, and has time for some excellent comic relief, I particularly liked Neville Longbottom’s bridge defence, it had me chuckling out loud. The climatic battle isn’t too much of an anticlimax either, which is a massive achievement for something that’s been built up for donkey’s years. The epilogue wasn’t too saccharin sweet either.

Some of the earlier Harry Potter films were a little too evidently cut down into film from huge tomes but this problem of condensing a massive book into a couple of hours on screen hasn’t affected both parts of the Deathly Hallows so much from a cinematic perspective. Perhaps it’s the doubled running time or the nature of the story, it just seems to flow better.

An overall opinion is pretty pointless- I imagine most of you will have seen this at the cinema and got it on preorder but just in case you haven’t, it’s great and it’s £12.72 at Amazon at the moment on triple play Blu Ray!