I’ve had so many pigs in blankets in the last few days I’m beginning to wonder whether I like bacon any more, which is something I thought I’d never ever say. Equally I’ve eaten more turkey than I’ve talked and am thoroughly sick of the sight of it. I know I’m not the only one too, wifey actually turned down the offer of some chocolate twenty minutes ago. 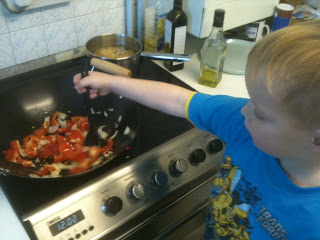 Well help was at hand. Completely and utterly fed up with grovelling on the floor and playing Batman Imaginext until my knees ached, wifey took pity and embarked on operation get the boy to cook lunch. The lad was given free rein on what to cook and he chose the old favourite of veggie pasta. And the wee lad cooked it all himself- right down from cutting the onion, to operating the garlic press (3 cloves if you wanted to know). Of course we supervised him closely to ensure that he retained all of his fingers and kept him clear of hot oil and sharp knives but he genuinely cooked the whole meal himself, right down to browning the onions and frying the garlic prior to adding the chopped tomatoes. He was also in charge of setting the table and dishing up. Unsurprisingly he got the largest portion but he did actually polish it off in its entirety. Wifey was very complimentary, actually saying it was nicer than her last attempt at pasta.

Cooking lunch kept the boy off the sofa for an hour or so and gave him  a real sense of achievement that watching the Neverending Story for the umpteenth time this holiday season. The shy smile of pride was incredibly cute on his chops.

What was best though, was getting the boy to clean up afterwards… 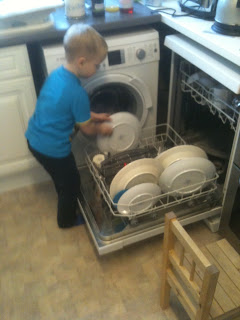