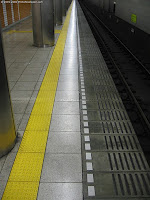 Getting a train at St Albans station is fun, ask anyone, ask Muddling Along Mum, she has fun with First Capital Connect all the time. Over crowded trains, people not moving along and general rudeness from passengers and staff alike aren’t what gets me though. What I resent is that no matter where I stand on the platform, if my toes aren’t literally over the edge of the platform, someone will without fail come and stand directly in front of me. If they think they’re position is too precarious, they’ll then shuffle backwards into me. Buffoons.

This is a feeling that the school run mums managed to recreate for me today in pretty epic fashion. I don’t normally do the school run at either end of the day on account of being at work but today happened to be the late run of the school nativity play*. So at quarter past six I was ten minutes early to pick the boy up this evening. I was the third parent there, standing a little bit back from the doors so as not to crowd any of the children coming out. Ten minutes later about 15 mums had pushed in front of me. I even had a few dirty looks as I stoutly refused to move the pushchair backwards to accommodate them.

I know wifey has had some proper school playground antics from some of the mums, ranging from “adults” turning their back on her when she’s arrived, to people treating her entirely differently depending on what coat she’s worn (Joules vs Verbudet) and I just think it’s pathetic. There are some really nice families there but some that obviously have a bit of a superiority complex. What it did remind me of was a bit of Dylan Moran stand up. He was railing against his kids because when they used their juvenile and immature judgement to make friends they inevitably made poor decisions, which lead to Dylan having to be friends with their parents, who were almost always terrible people.

Maybe I’m odd but when we were told we’d make some of the best friends we’d ever have at ante natal classes, I didn’t believe it and was proved right. At the end of the day people at ante natal classes or the school gates only have one thing in common with you, and that’s being in the same place as you. There’s more to making friends than that isn’t there?