Things have slipped out of control. Not suddenly but in a gentle creep that’s surprised us now we’ve actually spotted it. What caused us to realise? Well it was 3.30am and Fifi started an hours worth of shouting. But this was a different sort of shouting from her normal general purpose shouting we normal have to enjoy endure. At that early pre-dawn time, we got a litany of “I want me Storio!” repeated for an hour. 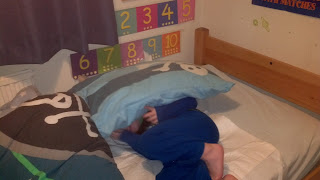 The reason for this? We let Fifi have a read of her Storio in bed after lights out. This was a response to the boy’s evening antics. Fifi usually goes straight to sleep and is generally a really good girl but the boys bedtime has got gradually more convoluted and drawn out. There’s the selection of books, I have to chose but not that one daddy, the precise ambient lighting has to be sorted out, toys taken down from shelves, and so on and so forth. It’s gotten to the stage that the little so and so is often awake at 9 o’clock, a full two hours after we’ve put him up to bed. Even if it does go quiet for a bit, we’re often bamboozled by the appearance of the boy, proclaiming he’s had a scary dream and wants to infiltrate our bed.

So tonight it all stopped. Back to some basic bed hygiene rules. Into bed and that’s it, sleep and nothing else. Fifi capitulated first- 5 minutes of protesting and then sleep. The boy on the other hand, he was a tougher nut to crack. There was shouting, running around, crying, and some more shouting. It was at this point we endangered our immortal souls. “Mrs Smith told us to do it boy.” Mrs Smith is the boys Headmistress. The boy stopped tantruming. He looked really put out and called Mrs Smith “naughty”. But he stopped. And let me tuck him in.

As wifey said later, in a philosophical moment, “Well, it is the sort of thing Mrs Smith would have said.”