I was lucky enough to be loaned a HP pavilion DV6 for a couple of weeks. Better still, I had plenty to chose from. What I asked for was a laptop costing no more than £500, so that would put it a level above the cheap supermarket tat but still affordable. For context, in our household we each have a sub £200 10 inch netbook. I’ve got an Asus 1015P and wifey has an MSI Wind. We’ve also got a 6 year old 14 inch Dell laptop that’s beginning to creak under the pressure of running Tweetdeck (although I have to say Tweetdeck is one of the shoddiest most resource hungry programmes I’ve ever had the misfortune to use). 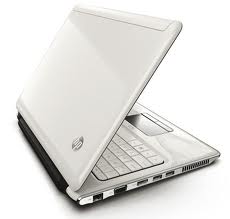 On cracking open the box for the HP pavilion DV6 I was immediately impressed. The grey metallic case was patterned nicely and had a funky HP logo that glowed when the machine was switched on. My techie eye immediately spotted an AMD logo on the case which intrigued me. Intel has long been the top dog in computer processors but AMD is regaining some ground, especially in mobile computing. AMD based machines tend to lack a bit of processing grunt but ever since they purchased ATi the graphics chip maker, their machines have been great all rounders. Unless you spend a lot of money on an Intel based laptop, you tend to get a crummy integrated graphics solution that’s more than a little bit feeble.

Booting it up though- oh my! The screen was a 15.6 incher and it was absolutely beautiful, lovely high resolution, so incredibly bright and vibrant I was really blown away. I was able to flick the resolution on my digital camcorder up to 720p and the DV6 coped with editing stuff with ease. I didn’t manage to have a fiddle with the finger print scanner security but can imagine that would be a good way of unlocking it.

If there was one thing it took more than a little while to get used to, it was the additional column of keys on each end of the keyboard. I’m a regular user of the control (Ctrl) key, for cutting and pasting, and for other keyboard shortcuts, so I spent the better part of a week opening the calculator programme as there was a special function key in the bottom left that, you guessed it, opened the calculator application.

Other than that, I really can’t fault the HP pavilion DV6, the keyboard is responsive, the trackpad not too irritating, there are more ports than you probably have stuff to shove in and did I mention the screen?

It’s cheered me up knowing what you can pick up from a major manufacturer like HP for under £500. In fact you can get the HP pavilion DV6 for £449 direct from HP at the moment. We’re just waiting for our antiquated Dell to finally die now.