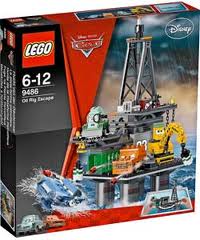 The sequence early on in Cars 2 when Finn McMissile is charging around the oil rig is one of the best in Cars 2, so the Boy was really chuffed when Lego sent him the set for his delectation. Lego Cars is great stuff, I’ve built some of the vehicles before, and aside from the need for superglue to stop Fifi pulling the cars to pieces and consigning the bits to the doom of the huge box of Lego, they’ve been pretty near perfect. I mean, have you ever seen a 4 year old take Lego to bed with him?

Obviously the oil rig isn’t quite on the same scale as the one in the film but that’s all well and good because if the scale was any bigger I’d still be building the thing a week on and cursing the name of Ole Kirk Christiansen into an early grave.

I wouldn’t really count the squeezed version of Leland Turbo as a car, since he’s a cube but there are plenty of vehicles to play with once you’ve built them and the crane is properly ace. It reminded me of my days with Lego Pneumatic Technics back in the 80’s (well I did have a bright yellow crane thing, so it was a bit similar). There are plenty of cars to have adventures with though, something the boy was keen to do, bouncing from foot to foot with excitement instead of helping me build the stuff.

We liked the cars but we also liked the crane and the winch thingy, with a proper wind mechanism. Ideal for little boys really. Here’s hoping they make a Cars 3 so we can play some more stuff :)