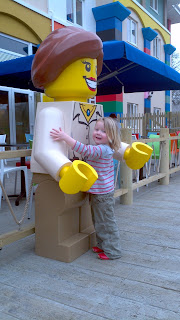 And thus we ended our trip to Legoland Windsor’s brand spanking new hotel. Suffice to say it went down enormously well with the kids and they were traumatised by the very fact we had to leave. The leaving Legoland traffic jam saw it take us about 40 minutes to get back to the M4 and by that point the hysteria had whipped itself up to fever point.

Lets wind it back to Friday evening though. Wifey had picked me up from work at half past four and we headed off for Windsor. It’s not that far from St Albans but given the Friday night traffic we thought it better to be safe than sorry. I didn’t help matters by inadvertently taking the M40 instead of the M4 but we got there in the end. I’m good like that.

The hotel itself is right by the entrance of the park, so you don’t have to drive up the massive hill to get there but more importantly you don’t have to queue down it to get out either (hurrah!). I can’t believe how much has been done to the place in the short space of time since I came to see the building site. Marvellous stuff.

Some chap came with a luggage trolley when I pulled up in the drop off point. With three kids (one of whom was crying dramatically because at 2 months he knew he wouldn’t be able to go on any of the rides), unloading the car can and often is a complete nightmare. Fortunately it wasn’t this time. All our luggage disappeared on the trolley, to be deposited up at our room just as I was changing my trousers. Fifi told me who was at the door, thanks to the nifty child height spy hole. I’ve subsequently had to explain to her why I can’t fit one of these at home.

The hotel is designed to be kid friendly from the ground up. The doors have spy holes, the toilet has a special kids seat that just lifts up for us grown ups and even the sink is low level so kids can use it without issue. We were put in an Adventure themed room and the kids absolutely loved it. The carpet was covered in scorpions, the wallpaper with hieroglyphics and so on, right up to the kids bunk beds with their own telly conveniently located for watching. Make sure you put the child lock on or the kids could run up a bit of a bill on the old pay per view movies though.

The best part about the rooms is the treasure trail though. You get a sheet with questions on and have to find the answers. The answers are all numbers, which are the combination to the lock on a treasure chest! This kept the boy and Fifi busy for the best part of half an hour and their squeals of joy when they got into the thing were brilliant.

The colourful Lego theme is redolent throughout the hotel. Even though I was busy celeb spotting, I couldn’t help notice the Lego statues on every corner, or the Lego animals in our room. The parrot was comfortably out of reach of the kids, which was a relief as I wouldn’t like explaining that one to reception. There was also a nice big tub of Lego for the kids to play with in the room, a nice distraction when we wanted a cuppa.

The restaurant is adjacent to a large play area, which was a bit distracting around meal times but the food (buffet) was pretty yummy, so the kids had their fill. The bar area is also quite relaxed, despite the primary colours throughout. Tucked away in the corner behind a large castle was a Lego building section where in theory you could put your cars down a ramp. In theory because it was full of kids going down it head first most of the time.

We didn’t get to try to splash pool out (which was a shame as it looked incredible) since it was inexplicably shut, which was a pity but it looked as good as any we’ve ever been in.

I’ve been scouring the Legoland site looking at booking another trip, we had that much fun. The icing on the cake is getting into the park an hour ahead of the crowds with the tickets that are included in the price. We must have gone on the Atlantis ride half a dozen times and the Scarab Laser thingy twice- both of which Q-bots don’t get you much of a head start on- which really made the day in the park all the more special.