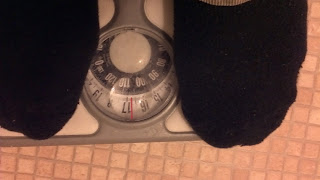 So the scales now say I’m a smidgeon over 16 and a half stone. Worryingly I appeared to get heavier as I leant over to take the picture. I know that time slows down with altitude but I didn’t expect to put on weight as I got shorter. Oh well.

My attempts at weight loss, I refuse to call it a diet as I’m not really following any fad or scheme, are testing my usually feeble will power to the point of breaking. So far I’ve managed to hold off but how much longer can I keep it up?

The biggest challenge aside from refraining from hoovering up all the chocolate in the fridge (“What do you mean you’d been saving it? It was at the back of the fridge under two tubs of margarine and behind the broccoli, I thought it was fair game“) the biggest change I’ve made is not finishing the kids dinners when the leave some/half/most of it. That’s taking iron willpower as I hate to see anything wasted.

Will I crack? I hope not. It’s much much easier to put weight on than lose it after all.