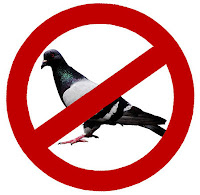 I’ve had the Nissan LEAF for a couple of days now and aside from the instant throttle response being a little uncanny, it drives just like any other car. With the usual sort of trip I do, I don’t particularly even have to keep an eye on the charge gauge any more than I would have with a petrol car.

Yesterday afternoon however I found one of the things I’ll have to alter my driving style to accommodate for and that’s the near silent running of the LEAF. The conversation between me and Brian, who I’d taken out for a spin, went something like this:

Brian: Pigeon up ahead.
Me: Dopey bird, he’ll move.
Brian: He’s not moving is he?
Me: Doesn’t appear to be.
*THUNK*BONK*BONK*
Spray of feathers from behind the car
Brian: He didn’t move then.
Me: Obviously didn’t hear us then.
Brian: Yup.

Before I got the LEAF I jokingly said I would employ a small child to run in front of the car waving a flag to warn people of my coming. It turns out that the LEAF really is that quiet because there is one poor myopic pigeon that didn’t hear us coming. RIP that pigeon.

If you want me to run a pigeon ambulance service, you could do worse than vote for me here