Some of you may remember my recent reminiscences about Sunday tea-time when I was little, and how Last of the Summer Wine was a fifth columnist infiltration device.

One of the things I remembered about those days back in the early 80’s was being forced to have very milky tea from the best china and a couple of slices of heavily buttered Soreen malt loaf. Eventually I was rescued from Last of the Summer Wine by a tiny black & white portable telly with a dial on the front to tune it (as Ted Lowe said, “for those of you who are watching in black and white, the pink is next to the green”) but the milky tea and malt loaf remained pretty much into my teens.

I recently rediscovered malt loaf, mostly thanks to a mixture of Boots including two slices in their meal deal snack section and Iceland having them on special offer. They’ve fitted in well with my diet too, espcially as I’m indifferent on carbs, I’m just focusing on calorific intake. 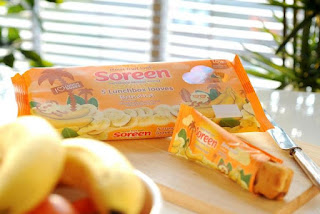 Pick of the crop by a country mile is probably the banana malt loaf lunchbox loaf. If the names a mouthful, rest assured the snack is too. They come in a pack of 5, and pretty much every time I cracked open a pack of 5 they all disappeared. They boy loved them, Fifi loved them and I usually polished off the remainder. I did try to get some photos, honest I did but all I managed to get was pictures of empty wrappers. I even bought two to work with me to photograph but I ate them on the way in. The banana malt loaves are lighter in colour than the trad ones, but just as moist and squidgy.

The boy has school dinners, so he’s had to resort to snacking on the lunchbox loaves at breakfast, after school and for his “mid-time feast” (his version of a midnight feast- he has to go to sleep earlier than that!), so I’ve actually been using the bright yellow Soreen lunchbox at work. And yes, I’ve just been packing it full of Soreen lunchbox loaves. I’m always up at the crack of dawn with one or other of the kids so don’t ever have the time to make a proper packed lunch. This is ideal although probably not recommended…..

There will be photos to follow, but my smartphone isn’t up to it. Expect to see suited people marvelling at my lunchbox. And that’s a pun worthy of Last of the Summer Wine!